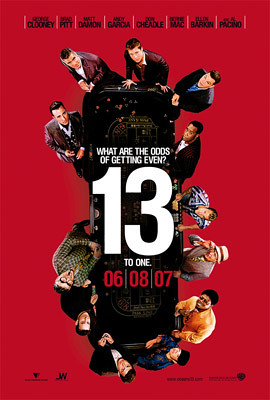 What are the odds of getting even? Danny Ocean and the gang would have only one reason to pull off their most ambitious and riskiest casino heist — to defend one of their own. But they’re going to need more than luck on their side to break The Bank. Ruthless casino owner Willy Bank never imagined that the odds were against him when he double-crossed Danny Ocean’s friend and mentor Reuben Tishkoff.

I have to say I really enjoyed Ocean’s Eleven (7.5), it was a great and very original movie in terms of a criminal romp/heist kind of flick. Hadn’t see as anything as smooth as that since the old gangster flicks. Plus the chemistry between Clooney and Pitt just worked really well.

Suffice to say I was disappointed and very underwhelmed by Ocean’s Twelve (6.0).

I’d heard a number of people say Ocean’s Thirteen wasn’t that great…and strangely I hadn’t checked the IMDB score – if I had I would have seen it’s got a very good 7.1! Similar to the rating of the first.

I decided to watch it anyway, and I’m thankful I did. It was surprisingly good – noticeably better than the middle movie.

If you liked the first one, you’d definitely like this one.

The main trio were fantastic again (Clooney, Pitt and Damon) with the side characters being as charistmatic and goofy as ever. 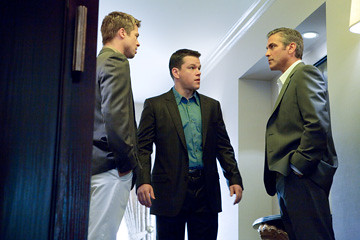 Matt Damon shows the depth of his acting, the way he plays Bourne then this character are oceans apart (pardon the pun).

It’s a very entertaining movie, if you haven’t caught it yet – I suggest you do! Especially if you’re a fan of the first.