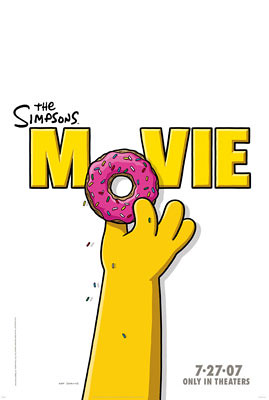 The locals’ casual disregard for the environment leads to Springfield being sealed off from the outside world. Big screen version of the hit animated series featuring the voices of Dan Castellaneta, Julie Kavner, Nancy Cartwright and Yeardley Smith. And Green Day

Ah finally after 18 years…a movie! I have been a Simpsons fan forever, I’ve been watching the series since I can remember watching TV. After all it started when I was about 11 years old. I used to love playing Bart’s Nightmare on my Super Nintendo (known as Famicom in US) and Bart vs the Space Mutants!

I have to say the last 5 seasons or so of Simpsons haven’t been that great, they’ve lost the punch of those early days with the classic episodes.

It seems after all, they’ve been saving all the good jokes for this movie. It’s gone straight into the IMDB top 250 at number #122 with a staggering 9.0/10.

It’s just non-stop, it’s reasonably short at 87 minutes, but it packs the jokes in – you almost don’t have time to catch all the puns. This year is turning out to be a good movie year, even with all the huge disappointments.

If you are a Simpsons fan, there are a huge amount of in jokes and almost all the familiar characters appear. Some of the side characters could have been used better, but the film really focused around the family themselves, and it worked just fine. Dear old Flanders plays a pretty big part too. 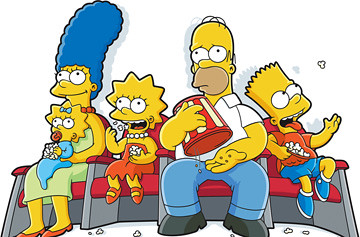 Watch out for Spiderpig, hilarious!

The movie has some deeper undertones too, with the starting sequence (Itchy and Scratchy) then the President and the whole environmental thing. There’s some other cool stuff about piracy and turning your cell phone off.

It could have been a little longer I think, it fit quite a lot in just under 1.5 hours…but it felt just nice. The time passed REALLY fast.

The jokes in general were pretty adult, but there was some kind of slapstick too and plenty of cool puns.

I actually went to see Die Hard 4.0, but there was no decent seats….and I managed to get some awesome seats in the THX from uncollected reservations! It’s the first time I’ve seen a movie on opening week for a long time!

All in all it’s a great movie! So go watch it now, and laugh your ass off.