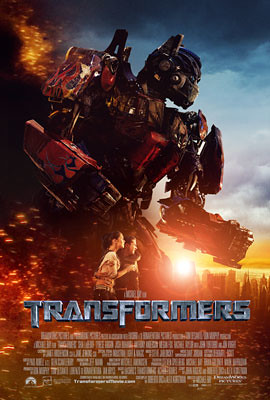 The Earth is caught in the middle of an intergalactic war between two races of robots, the heroic Autobots and the evil Decepticons, which are able to change into a variety of objects, including cars, trucks, planes and other technological creations.

What a movie, unsurprisingly it’s got a hefty 8.6 on IMDB, I would be surprised if it didn’t get into the top 250 pretty soon.

Yah so Bumblebee wasn’t a beat up VW Beetle, get over it 🙂 The Camaro rocked it, and they did pay homage to the original, if you notice Bernie Mac tried to sell a beat up old yellow beetle to Sam in the parking lot, it was the car that Bumblebee based with his door. His character was still the same too, brave – so it’s cool with me.

Shia LaBeouf was excellent as Sam Witwicky and held the whole film well. 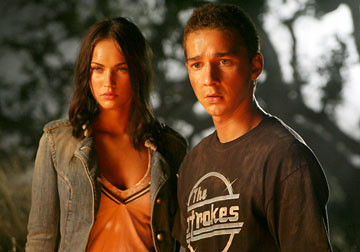 And wow is Megan Fox hot, sometimes a bit distracting, not surprising that she was named #68 in FHM magazine’s “100 Sexiest Women in the World 2006” supplement.

And the Transformers themselves, WOW, that’s all I can say. They were just so real, there was no point in the movie I had to suspend my belief as it looked fake…I didn’t have to tell myself “It’s just a movie”.

They WERE real, they were there, they were hiding under Sam Witwicky’s porch, it was flawless. The interactions between the humans and the autobots were superb, sometimes funny, sometimes serious and once even cute…

But somehow it worked.

And Megatron was one hell of a badass, I understand why they couldn’t use his original a form, a gun becoming a giant monster or NBE-1 as they called him…would be a bit far-fetched.

So his new look alien-space-fighter-thingy was extremely cool.

Within the first 5 minutes the movie had your adrenaline pumping, and it didn’t let go – then the car chase….ROCKING!

I wish they had Soundwave in though, you can read some interesting Trivia here and some justifications on why they did certain things the way they did.

Starscream was totally awesome, the way he transformed was just one of the coolest things ever.

My only real gripes were the fight scenes were a little too tightly filmed, meaning the action sometimes was just a blur on the screen as you couldn’t really see what was happened. It has been like that for a while though with action movies as it tends to make the action more intense. My other point would be how easily Megatron being the all-powerful Decepticon that he is, was defeated.

Say that though, this is definitely THE best comic book movie ever, and so far, I’d say it’s definitely the best movie of the year.

I give this a laser blasting 9/10 – I guess I’ll be going to the cinema to watch it again.