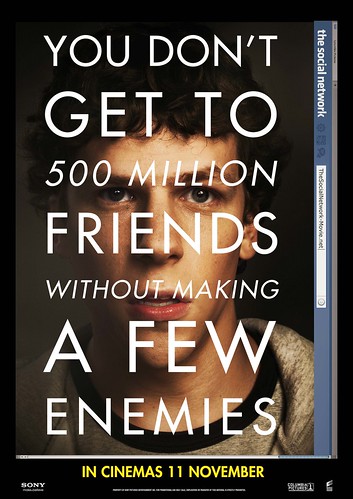 On a fall night in 2003, Harvard undergrad and computer programming genius Mark Zuckerberg sits down at his computer and heatedly begins working on a new idea. In a fury of blogging and programming, what begins in his dorm room soon becomes a global social network and a revolution in communication. A mere six years and 500 million friends later, Mark Zuckerberg is the youngest billionaire in history.

This is a movie that I’ve been interested in since I heard the first whispers about it, Mark Zuckerberg is an interesting character and his achievement is phenomenal. The youngest self-made billionaire in history, this is certainly quite a claim.

Being a techy myself, and of course being interesting in social networks and so on this is a movie in my realm of knowledge and interest. Honestly I didn’t expect it to be very good, but once the reviews started coming in I was a little surprised. We were originally supposed to be watching it on November 1st – but it ended up being postponed by the distributor to November 22nd.

Jesse Eisenberg is simply superb as the slightly odd Mark Zuckerberg, you really get the feeling he’s like that – ubersmart, likes to write the code himself, rants, sarcastic, witty, arrogant and so on. I can believe it totally, because believe it or not I know people like that – some of the greatest coders/hackers I’ve ever met. 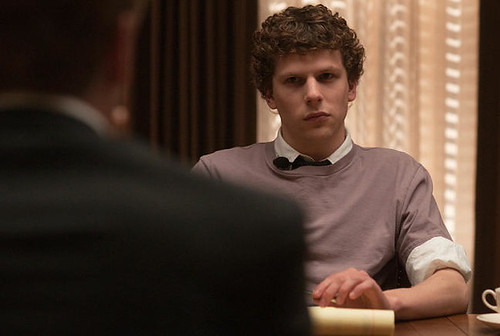 Of course there are also people who think they are smart and act like that, but that just doesn’t cut it and usually doesn’t end well for them. Andrew Garfield was great as Eduardo Saverin, who I recently discovered in the rather intense movie Boy A. And of course JT, the one and only Justin Timberlake who was the douchebag coke head Sean Parker of Napster fame. He’s always been a good actor, much to the surprise of many – I knew it since I saw Alpha Dog – which is actually a good solid film.

Rooney Mara was ok as Erica Albright, but didn’t play much of a part in the movie – just to add drama I guess. And she has her name changed, apparently her real name is actually Jessica Alona – but as she’s never come forward it’s not been proven. But it’s according to the online diary Zuckerberg wrote and was used in the Facemash scenes of the movie.

The score by Trent Reznor (of NIN fame) was absolutely banging, gotta get a hold of that later on. Cinematography was good, as to be expected with Kevin Spacey as the producer and the gritty look from director David Fincher (Fight Club, Se7en, Zodiac, Benjamin Button etc.)

As for how true the whole thing is? Well after all it is a movie, some things were changed to add drama + make the storyline more coherent. Most of the things happened in some form or another, but the timeline they were portrayed in the movie isn’t purely accurate. And as the story was fed to the original book author by Eduardo Saverin, it shows him in a better light – apparently he was a much bigger asshole in reality than shown in the movie.

If you’re really interested there’s a lot of stuff online about this, then the original book the movie was loosely based on (The Accidental Billionaires) and another supposedly more ‘accurate’ book called The Facebook Effect.

On another note I was somewhat ashamed that I understood every single thing Mark Zuckerberg was mumbling about in the movie (Apache indexes, PERL scripts, EMACS etc..), which just shows how truly geeky I really am. Well if it can make you a billionaire, I guess it’s not that.

But then again, I’m certainly no Mark Zuckerberg 🙂

All in all it’s a good movie, definitely worth a watch and I give it a facemashing 8.5/10.