After the first major 2-part service I thought I’d be all good, after spending RM6100…I thought I’d be ready to go! But no, the car was smooth and powerful now but the idle was very lumpy, there was jerking during WOT (wide open throttle) and it STILL kept stalling.

This was the part where things went downhill a bit, I started to realise this workshop didn’t know too much about problem solving. They were fine when it came to basic service, finding parts and normal stuff.

I also started to get very intimate with the engine of my car, started reading a lot, joining forums and learning a hell of a lot more about what was going on. Thankfully I found a superb Mitsubishi Airtrek Forum at https://airtreker.com/ where I’ve made some great friends and learned even more (and also I’ve coincidentally become the forum admin). 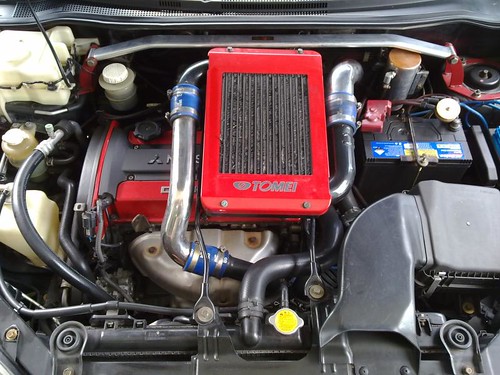 For those that don’t know a lumpy idle is the term used when the idling of a car is very uneven, it’s not unstable, it’s almost rhythmic and it’s due to having high cams. It sound something like this:

Anyway my car had that, and I knew due to the fact it had a Tomei ECU and Tomei sticker and a Tomei intercooler mount..it had Tomei high cams. So we kept on looking for the problem with the stalling, another fault part was found, the turbo suction hose which was cracked…so I replaced that. 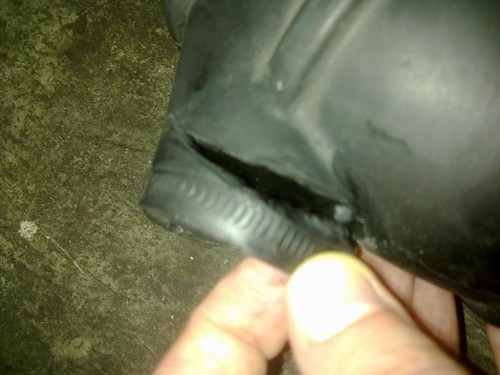 The Air Flow sensor also failed, it gives an intermittent CEL (Check Engine Light) for a while and causes extremely jerky acceleration under full load – this had been bothering me for a while and I was happy when the CEL stayed on permanently so I could scan it and get it fixed. I managed to get a second hand Airflow Sensor from scrap and it’s serving me well still. This is the old faulty AFS. 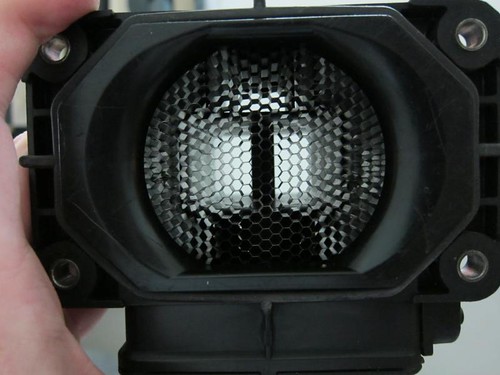 They starting blaming the stalling problems on the high cams and misfiring on soiled spark-plugs, so they proposed to change the sparkplugs, fit a case steel below the intercooler to stop water running into the spark plugs from the bonnet vent and to fit adjustable camshaft pulleys.

All of which made sense to me. I started studying the car and it’s behaviors often to try and get a feel of what was going on. The reverse sensor was freaking out a bit too, so I changed that. The BoV (Blow-Off Valve) also seemed to be leaking under low pressure, I had this verified elsewhere (as it would also contribute to the stalling) and had that changed too. I went back for the same type, Greddy Type-RS. I think the old one might have been a Type-R or a fake as it has no marking – this is the old leaky BoV. 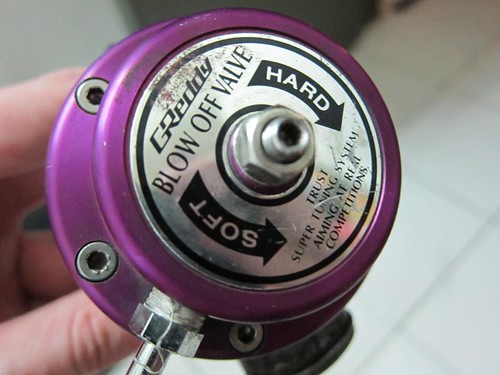 When buying a BoV, make sure you get an original as there are a LOT of fakes out there – especially for HKS SSQV types (including the black one). I’ll talk more about the BoV and why I chose this particular one later.

As I was changing spark plugs (To Deno Iridium IW24) I decided to change the cables too, the first ‘mod’ to my car. I went for NGK Power Cables..which coincidentally the mechanic later told me were the exact same kind the previous owner used. I went for IW24 plugs as those are the right heat range (8) for my car which is considered slightly to moderately modified. 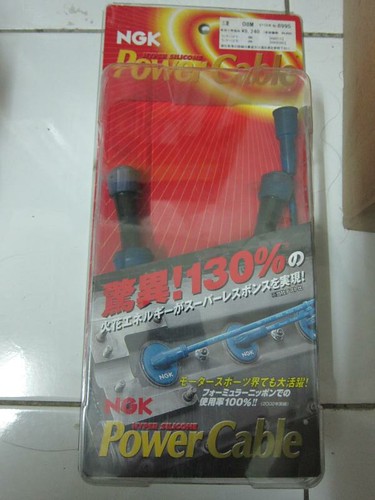 Anyway back the cam pulleys, these are the original stock cam pulleys which can’t be adjusted, I got a pair of Arospeed adjustable cam pulleys. You can see the E and I markings for Exhaust and Intake. 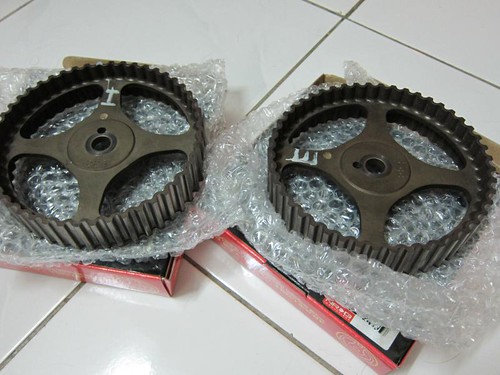 I’d have preferred Skunk2 Titanium..but he didn’t really offer me a choice and he overcharged me for them..told you things were going bad. But by this point I was cheating on him with another better mechanic, so when this last set of stuff was wrapped up..I was out of there for good. If you have no idea what I’m blabbering about, read this – WHAT IS ADJUSTABLE CAM PULLEY AND HOW IT WORKS.

He also adjusted the cam pulleys, but honestly his tuning was shit, the idle was still lumpy and the power wasn’t there from the additional lifts on the high cams. But by then I’d had enough and was out of there.

The damage for this round was:

And you know what? My car was still stalling! But more on that later, when I finally got to a decent workshop. So by this stage I was up to about RM8700 and I didn’t have a fully functioning car..all these parts replaced and still having problems? The perils of owning a turbo car!