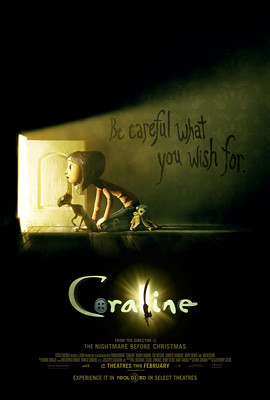 Coraline Jones is a girl of 11 who is feisty, curious, and adventurous beyond her years. She and her parents have just relocated from Michigan to Oregon. Missing her friends and finding her parents to be distracted by their work, Coraline tries to find some excitement in her new environment. She is befriended–or, as she sees it, is annoyed–by a local boy close to her age, Wybie Lovat and visits her older neighbors, eccentric British actresses Miss Spink and Forcible as well as the arguably even more eccentric Russian Mr. Bobinsky. After these encounters, Coraline seriously doubts that her new home can provide anything truly intriguing to her, but it does; she uncovers a secret door in the house. Walking through the door and then venturing through an eerie passageway, she discovers an alternate version of her life and existence.

I recently got around to watching Coraline, as a fan of Neil Gaiman it was something I was looking forward too.

And I have to say I wasn’t disappointed, Mr. Gaiman released the novella to quite some acclaim netting himself some awards in the process.

The book was faithfully reproduced in stop-motion animation and released as a film (novellas always convert better to movies due to the their non-epic nature). If you’re read American Gods or Anansi Boys, imagine trying to make them into movies?

Anyway Coraline is doing very on IMDB with a score of 8.1 and I’d imagine given some time it will enter the top 250.

It’s definitely one of the better animations made in our era, along with Wallace and Gromit of course!

The settings for the film are very atmospheric and it’s generally quite dark, it could be consider in the horror genre (not slasher or jumping out of your skin horror though).

It’s very subtle and menacing but spectacular too.

Remember be careful what you wish for!

Definitely 100% worth a watch if you haven’t seen it yet, do it now!