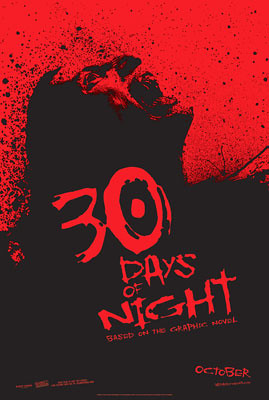 In Barrow, Alaska, the northernmost town in the U.S, the winter sun sets and does not rise for 30 days and nights. From the darkness comes an evil force that strikes terror on the town, and all hope is pinned on a husband-and-wife cop team.

Overall it was an enjoyable movie, the tension was built nicely with the ‘outsider’ showing up, some character building was done for the main cast and everyone played their roles admirably.

The only part I found really unbelievable was Josh Hartnett as the sheriff – he’s just way too young and clean cut. I could have bought him as the deputy..but sorry just not as the main man.

The vampires were believable, realistic and quite scary. Definitely more monster like than your suave Tom Cruise vampire, but more intelligent than your average zombie or monster. 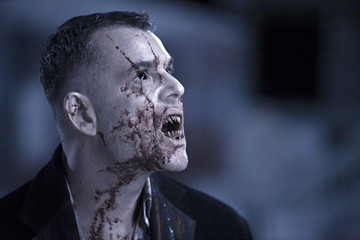 The filming was generally good, apart from the action sequences..they seemed a bit undecided about the level of gore, sometimes the camera work was frenetic and you couldn’t really follow what was happening, then sometimes it was steady and pretty gruesome. Some of the shots are plain fantastic, like the overhead view of the chaos when the vampires go all out destroying the town.

Personally I’d love to see all the blood in gore in full detail with a steady camera and some close up shots.

There is some feeling in the movie too with people having to make moral choices of sacrificing loved ones for the greater survival. Don’t however expect any great plot or any twists and turns of complexity.

It’s one of the better horror/vampire flicks to have come out recently and it’s definitely worth a watch if you’re a fan of the genre.