I’ve seen most of the great DnB and hardcore DJs play around the UK and met quite a few of them too (DJ SS, Carl Cox, Goldie, DJ Rap, Grooverider etc.). Recently there has been a renewal in the DnB scene – some great new acts coming out of Hospital Records and the too-urban, too-male, too-hardcore vibe is being replaced with some beautiful new melodies. This has firmly renewed my interest in DnB and the scene as a whole.

Today however I’m not talking about DnB, although I will in another post.

Today I should like to introduce Squarepusher – just because he’s so crazy. I think only a Brit could come out with such whacked out songs and gain so many fans. He has a genre which is a sidestep from Drum and Bass called Drill and Bass…because it DRILLS your head.

Squarepusher is the performing pseudonym of Tom Jenkinson, an English electronic music artist signed to Warp Records. He specialises in the electronic music genres of drum and bass, musique concrÃ¨te, and acid, with a significant jazz influence. 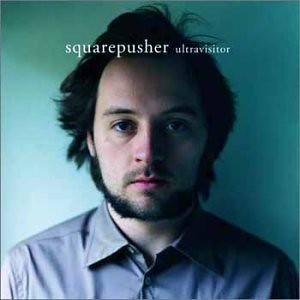 He has a lot of trippy work and has a lot of jazz influence, he makes his own sampling hardware from weird stuff and makes the most CRAZY tracks you’ve ever heard – he also plays the Bass guitar himself. Come on My Selector is one of his more typical Drum and Bass tracks, if you want to really feel the Drill and Bass thing you gotta listen to this and preferably the whole of the 1996 album Big Loada.

He’s enigmatic because I have his whole discography but I actually can’t listen to most of it as it gives me a headache. Not to say it’s all bad, he has some awesome tracks too – and some which just take the piss…like My Red Hot Car. This song actually got played on the radio, listen to it first and see if you can make out the lyrics.

It’s one of his rhythmically more linear tracks, some of the tunes have so many stuttering overlayed rhythms you don’t know what the hell is going on. You can find the actual lyrics here – funny eh. It’s a song you could expect most people to like, perhaps enough to go out and buy his album…after that they would hate you. The album version of this song is just so much more chopped up.

Some people call his style ADHD Drum and Bass because he can’t seem to stick in one place. Check this one out and you’ll know what I mean (I Wish You Obelisk).

Then again some of his songs are just 5 minutes of weird noise. Either way the inevitable result of listening to ANY of his albums would be that he’s INSANE. One of his most popular (and more recent) offerings would be Ultravisitor – this opened up Squarepusher to a lot of people as it’s not quite so extreme as his earlier work.

Even though the opening track is still quite intense (Interesting write-up here and almost uniform rave reviews here).

A love a track from his latest 2006 album (Hello Everything) called Hello Meow, you can see him play it live here.

Sometime amidst all the chaos he just comes out with a strangely haunting, beautiful and melodic track. One of the best examples is Iambic 5 Poetry from Budakhan Mindphone.

You can see an interview with the strange man here.

He has quite some variety in his work too, Music Is Rotted One Note is basically a pretty decent Jazz album.

Selection Sixteen is one of his best accepted albums, so if you’re looking for a place to start with Squarepusher that might be a good one.

So anyone interesting in electronica, or music? Or you just into what you hear on the radio? If you enjoy this kind of post let me know and I’ll do more about different genres of music.

Anyone ever listening to Squarepusher?