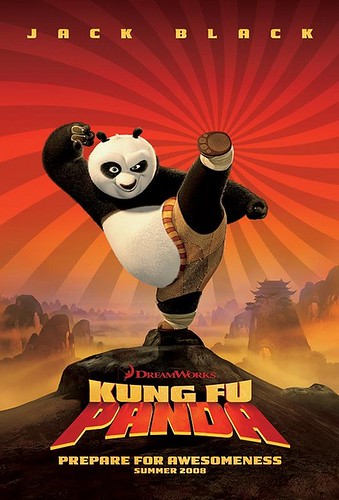 Po the Panda is the laziest animals in all of the Valley of Peace, but unwittingly becomes the chosen one when enemies threaten their way of life.

I have to admit I did laugh when I saw the trailer for this movie at the cinema last year and was quite looking forwards to it. I didn’t manage to catch it at the cinema and a few people said it wasn’t really worth it anyway.

I did however manage to catch it on the way to UK, it was a little disappointing I think. I still think Pixar is better and Dreamworks relies too much on celebrity voices. I mean how much must they have paid out for the voices of the 5 animals (Jolie, Chan etc), and they each had what 1-2 lines of dialogue each in the movie?

It was beautifully drawn on the whole and there were some entertaining moments.

Although it was a bit of a lame story….well hardly a story at all, accidental hero? Seen that before no? Just not in the guise of a fat panda voiced by Jack Black.

It seemed like a relatively short movie, but then I guess it’s supposed to be aimed at a younger audience so it’s quite suitable. I have somewhat of a longer attention span though so require a bit more depth.

The anti-hero or baddy was quite scary enough for a kids movie, but far from tough enough. In real life he would have ripped the fat panda into pieces and stomped him into the dirt.

He appeared to be a snow leopard, but his name in Chinese meant big dragon?

Plus it bugged me that the name of the ‘master’ was shifu which is master in Chinese…so Po kept calling him master master..

There were a few funny moments but sadly I’d already seen them in the trailer, nothing much new after that. It does poke fun at the old school kung fu movies and there are a bucket load of cliches thrown in for good measure.

Anyway it’s worth watching, I can’t say I’d want to watch it again so don’t expect anything fantastic.

More Woes….Water This Time
My Arrival in the UK – KLIA – Dubai – BHX