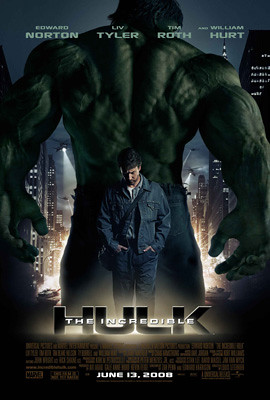 Scientist Bruce Banner desperately hunts for a cure to the gamma radiation that poisoned his cells and unleashes the unbridled force of rage within him: The Hulk. Living in the shadows–cut off from a life he knew and the woman he loves, Betty Ross–Banner struggles to avoid the obsessive pursuit of his nemesis, General Thunderbolt Ross.

The new Hulk movie came somewhat out of the blue and very quickly after the fabulous Ironman, it’s another Marvel production and considerably better than the first Ang Lee effort “Hulk“. It wasn’t as hyped as Ironman and perhaps they should have bought it out first…

Not to say it’s not a good movie, but it’s hard to compete after Ironman. It’s doing well om IMDB with a 7.9 at the moment – I’d say it’ll go down to somewhere about 7-7.2 as it’s not quite that good.

Some found the Ang Lee version much to ‘talky’, this one is a bit slow in the beginning too – it does pick up. Hulk is a sad story after all and thankfully it’s much better played out in this version though.

Edward puts in a good performance as the weakling Banner trying to hide away and solve his problem with Gamma poisoning.

Liv Tyler is a bit annoying, she seems to be lacking depth..the Hulk on the other hand is fantastic. Especially the show down with the Abomination!

Hearing those immortal words of “Hulk Smash” was fantastic. 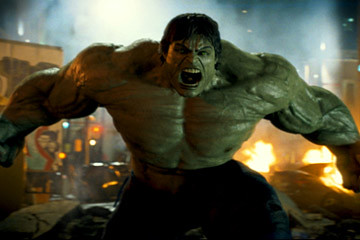 The rest of the cast was solid, William Hurt was great as the general and looked as though he came straight out of the book. Tim Roth was good as the slightly twisted Blonsky and the rest of the cast supported well (with the cameos from Stan Lee and the REAL Hulk Lou Ferrigno).

The Hulk is a bit of a one dimensional character himself, only the aspect of Banner adds something to the story…and the tussle between Ross and the General.

I’ll be interested to see where they take it after this.