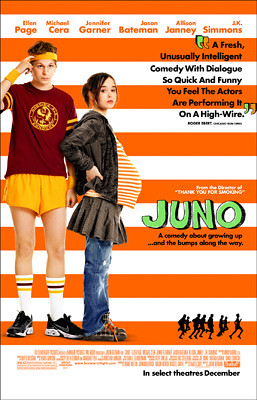 Juno is a whip-smart teen confronting an unplanned pregnancy by her classmate Bleeker. With the help of her hot best friend Leah, Juno finds her unborn child a “perfect” set of parents: an affluent suburban couple, Mark and Vanessa, longing to adopt. Luckily, Juno has the total support of her parents as she faces some tough decisions, flirts with adulthood and ultimately figures out where she belongs.

This is a fairly low budget movie from a first time screenwriter (Diablo Cody an ex-stripper) that has won some critical acclaim and some heavyweight awards (Best Original Screenplay Oscar and a bunch of other nominations). It also scored very highly on IMDB making the top 250 easily.

It’s a movie that some average Joes won’t like, it’s rather caustic, it doesn’t have a very twisty plot or much of a plot at all really. It’s an exceedingly human movie, it’s about the journey of a young girl, her decisions (abort, continue or retry hoho), her sarcasm, her issues and the people around her.

Ellen Page is very convincing and snarky as Juno, the star and Michael Cera plays pretty much the same role he did in Superbad. 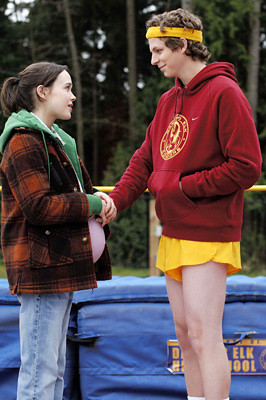 He has the most classic dopey expression evar! He fits the role well though and it’s all rather sweet in the end.

The movie expands well on the yuppie couple too, which I guess most writers wouldn’t – those secondary people tend to get glossed over in most movies. I think what wins with this movie is the fact it ambles along, it’s relaxed, but it doesn’t miss anything and has a surprising depth.

For most audiences it’ll have trouble competing against the frenetic big budget movies with huge names and massive marketing budgets, but if you want to see a real movie about real people – this is definitely one to watch.

The dialogue is great, it has moments that are laugh out loud funny – that’s if you appreciate extremely crude insults and witty reparte.

I give Juno a refreshing sidestep from big budget overload 7.5/10.