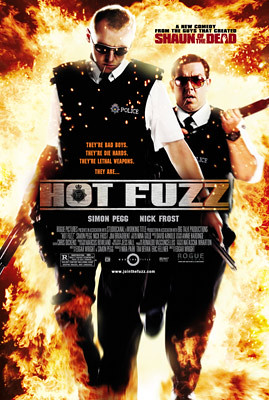 Nicholas Angel is the finest cop London has to offer, with an arrest record 400% higher than any other officer on the force. He’s so good, he makes everyone else look bad. As a result, Angel’s superiors send him to a place where his talents won’t be quite so embarrassing — the sleepy and seemingly crime-free village of Sandford. Once there, he is partnered with the well-meaning but overeager police officer Danny Butterman. The son of amiable Police Chief Frank Butterman, Danny is a huge action movie fan and believes his new big-city partner might just be a real-life “bad boy,” and his chance to experience the life of gunfights and car chases he so longs for.

Following in the vein of Shaun of the Dead (SOTD) another black comedy from the same gang with a few other familiar faces like Timothy Dalton (James Bond remember?).

I don’t think it did very well in the movies here, people don’t seem to be such fans of dark British comedies like this, if you like stuff like The League of Gentlemen you’ll love movies like this.

Most people wouldn’t get the in-jokes, the poking at Hollywood movies and the mountain of movie geek references. I think you have to watch this movie 2-3 times to get them all.

It’s pretty much a crazy movie, with a ridiculous plot, a lot of recognisable faces (only if you are from UK or a fan of UK drama/comedy shows though) and a wicked fast pace.

There was some serious actors used and they did really well, it’s a non-stop movie and has visual gags too if the subtle humour is too deceiving.

I have to say though on first watch I definitely enjoyed SOTD more.

I didn’t know what the movie was about when watching it and had no preconceptions, I’d just heard a few people mention it in the same sentence as SOTD…and it’s British so it must be good 😛

Simon Pegg nailed it again as Nicholas Angel the supercop. 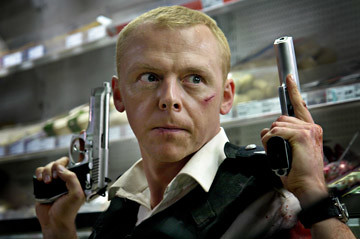 Basically the movie is like Midsummer Murders + Bad Boys 2, you are kept guessing “Who dunnit?”

And the pace is nice, it doesn’t start out as sharply as SOTD, but it certainly gets moving after 20 minutes or so.

If you enjoyed SOTD, you’ll love this.

Definitely worth a watch, especially if you are dying for something different.