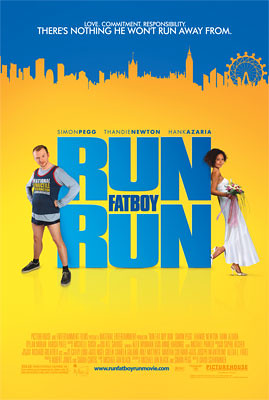 A charming but oblivious overweight guy leaves his fiancee on their wedding day only to discover years later that he really loves her. To win her back, he must finish a marathon while making her realize that her new handsome, wealthy fiance is the wrong guy for her.

Now it’s been a while since Hot Fuzz and before that the instant classic Shaun of the Dead, now Simon Pegg and his gang return with Run Fatboy Run. Scoring a solid 6.9 on IMDB this is a far less silly and far-fetched movie than the previous two.

It’s much more settled, based purely on real life and is very much character oriented. The lead character of course is Simon Pegg playing his gormless self very well as usual, he’s a bit pitiful in this movie (well a bit more than the others..) and is plagued by personal problems. 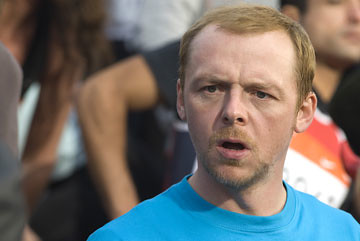 The movie shows the real London and is really very British (that includes the humour), which surprised me when I found it was directed by David Schwimmer of Friends fame. He obviously really gets British humour, but then he was involved in Little Britain USA – so he should! 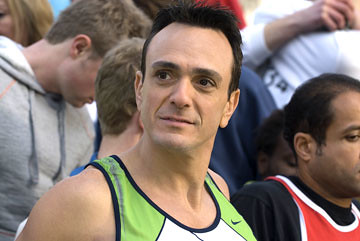 Over all it’s not a groundbreaking plot, but it’s kinda of a feel good movie and offers some of the best dialogue I’ve heard in a movie for quite some time. Dylan Moran is hilarious as the whacky Irish cousin of Dennis (he’s actually a stand up comedian). There are a LOT of cameos in this movie too if you are familiar British comedy series and comedians you’ll spot a lot of familiar faces.

If you like Brit comedy (and actually understand it) then do watch this movie, you’ll enjoy it. Oh yah and check out the landlords daughter, she’s HAWT.