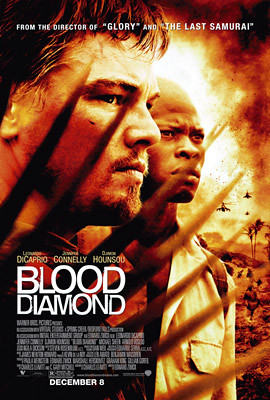 Set against the backdrop of civil war and chaos in 1990’s Sierra Leone, Danny Archer, a South African mercenary, and Solomon Vandy, a Mende fisherman are joined in a common quest to recover a rare pink diamond that can transform their lives. While in prison for smuggling, Archer learns that Solomon–who was taken from his family and forced to work in the diamond fields–has found and hidden the extraordinary rough stone.

Thankfully had a little time at the weekend and managed to catch up with this movie, I’ve been wanting to watch it for quite some time and missed it at the cinema.

After winning quite a lot of acclaim and getting a few awards, it sparked my interest, it also scored a very strong 7.8 on IMDB.

I have to say it is a very good movie and Leonardo DiCaprio seems to be winning back a lot of skeptics, especially with back to back performances in this and The Departed.

Once again I’ve always said he was a good actor since watching What’s Eating Gilbert Grape.. 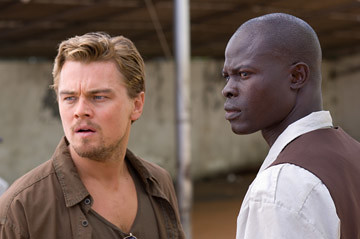 Hounsou put in a stunning performance as the fisherman caught in a civil war, at the risk of losing his family but having the chance to escape it all by finding a huge pink diamond.

The movie is a hard hitter dealing with serious issues much like Constant Gardener it also deal with issues in Africa.

This time however it deals with the issue of Blood Diamonds, diamonds exported illegally from conflict zones that support rebel factions in a civil war against the ruling government.

If the movie portrays reality or not isn’t an issue for me as afterall it is a movie, a work of fiction, not a documentary. You shouldn’t base your judgements or political ideals on what you see in movies. Saying that however, this movie will make you think if you really want to partake in buying diamonds or not as a lot of it true (like the fact the large diamond companies stock-pile diamonds to make them seem rare and keep the price high when stones like Ruby are actually much rarer).

Anyway, if you haven’t seen this movie I suggest doing so, it’s excellent and well worth a watch. Be prepared to be a little depressed after watching it however 😉