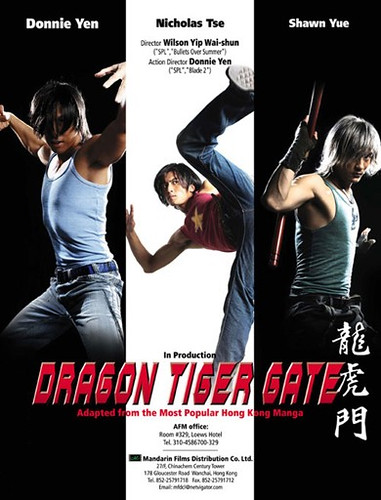 Dragon Tiger Gate is a martial arts academy established by three youngsters, Tiger Huang , Little Dragon Huang and Black Dragon Shi. Adopted as children by kung fu master Huang Jianglong, they aspire to impart the spirit of Chinese martial arts to the world. The final showdown between good and evil is a spectacular battle that makes the walls of Dragon Tiger Gate quake.

Yeah I’ve managed to catch up with quite a lot of movies lately!

The action was also directed by Donnie Yen himself, which shows as he is now experienced and mature in his style, the action elements and choreography was very good through-out the film with some pretty unique and exciting displays of fighting and interesting use of weapons.

Honestly speaking though, he still has a long way to go to catch Yuen Wo Ping.

Apart from that, I love any movie that has nunchukas in it!

The movie itself was adapted from some very famous Hong Kong manga (comic books) so the story and plot is already laid out, even though you don’t really need a phd to understand it, it’s the same old basic good vs evil thing with very little deviation.

As you can probably guess, the story itself is nothing special…the romantic elements are actually quite pukeworthy and the rest you can guess as it goes along.

Basically I only suggest you watch this movie if you really enjoy good well crafted fight scenes, as I do, so I did enjoy this movie.

Donnie Yen once again manages to appear eternally youthful and carries out his role very well, not that any of the three leads have tough jobs as apart from Shawn Yue they both play fairly silent reflective types.

I found Nicholas Tse was a little soft and girly for the role he was supposed to be playing, I would have preferred someone else.

Shawn Yue was adequate as the more bubbly and confident Turbo. 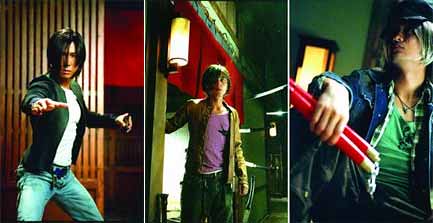 You don’t really feel for the characters and the flashbacks are a bit annoying with upright ‘moral’ overtones.

The final villain is a bit of a joke too, the fight scene is quite good though.

Overall the movie is a nice piece of comic book escapism which could really use a good producer/director.

I’d say watch it for the fight scenes (especially the first big one) and give it a fairly mediocre head kick of 4.5/10.