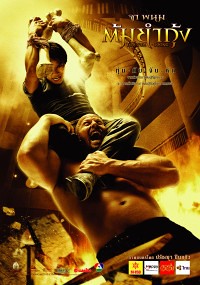 A young fighter named Kham must go to Australia to retrieve his stolen elephant. With the help of a Thai-born Australian detective, Kham must take on all comers, including a gang led by an evil woman and her two deadly bodyguards.

Ah yes, much like the one before it, the legendary Ong Bak! Ong Bak was a low budget martial arts flick that everyone fell in love with, why? It’s super brutal realistic fighting and stunt sequences, like a blend of Jackie Chan in his early days for the crazy stunts, Bruce Lee for his rawness and energy and Jet Li for his finess and fighting accuracy.

Tom Yum Goong is similar but has the feel of a much higher budget, some CG some expensive toys and explosions, Bondesque boat chase sequence and some helicopter action.

Much like Ong Bak the script and plot is something you wouldn’t even wipe your ass with, but that doesn’t stop it from being an awesome film!

The acting is so-so, but once again the fight sequences will blow you away. 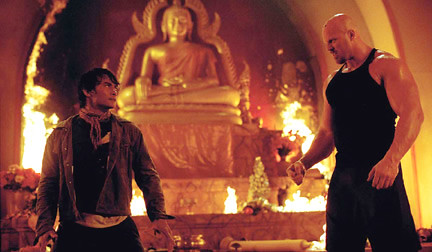 This was my favourite, with a wu-shu style swordsman, a huge scary white guy as seen above (Nathan Jones, he’s been in some Jackie Chan flicks, Fearless, Troy etc) and some guy that could do Capoeira with such style, really really amazing.

The scene was filled with water and had a perfectly lit flaming backdrop with a buddha watching over it all, really really good.

Another good one is the fight all the way up the stairs, taken in 1 shot, unbelievable filmwork really.

The first 10-15 minutes of the movie are quite slow, very arty, nicely filmed, nice shots of Thailand etc..but really you are like OMFG KICK SOME ASS PLEASE.

The subtitles are non-existent, they only show up when people say something really obvious, or they speak in Chinese or English, at which point if they are speaking English, I really don’t need the bad English subtitles ok?

Not that you need them, the movie is about some dude trying to find his elephant and kicking 72 kinds of ass along the way, that’s it, end of plot summary.

Petchtai Wongkamlao was funny as expected, him being one of Thailands most prolific comedians. Bongkoj Khongmalai was very very sexy *pant* as the lost girl in the wrong place.

This is a really great martial arts movie, I loved it and will watch it again shortly (the ass kicking parts anyway, perhaps not the soft focus shots of Elephants).

If you are pretentious about movies, are looking for a plot, don’t enjoy action..don’t watch this movie.

However if you love to see some dude demonstrate 101 ways to break someones arm, do watch this movie!

I Got SMOKED
All About My MONSTER!