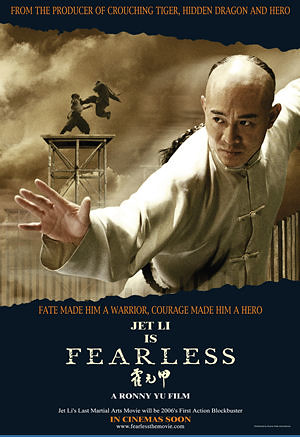 Yeah I know it’s kind of old, just got around to watching it though, I missed it on the cinema unfortunately.

Touted to be Jet Li’s last movie, must say I’ve been a fan of the boy since he was in Shaolin Temple back in 1982.

As a Ronny Yu film (Bride with White Hair, 51st State), with Yuen Wo-Ping choregraphy, you have to expect it to be action packed butt kicking classic!

And well it pretty much was, I heard some people mention it wasn’t a very good film, but I don’t know why?

I found it very good indeed, Jet Li acted well for once (reminded me of his excellent character representation of Wong Fei Hung).

The fight scenes were beautiful and pretty original.

The movie was well paced with good character developement and a nice non-sequential narration of the story, the scenery was beautiful and although a little cheesy (preaching) at times it is a very morally sound tale.

It did indeed score a very strong 7.5 over at IMDB.

Plus it’s based (very loosely) on a true story, the story of Huo the spiritual founder of the Jing Wu martial arts school.

Sadly it was heavily edited to a more mainstream length, I would love to see the uncut version some day.

However, Fearless is badly edited from the original 150 min version. To fit in the market demand, Fearless has been mercilessly chopped into a 103 min theatrical version. Michelle Yeoh, who makes a special appearance in Fearless, has been unfortunately removed. The duel between Jet Li and Thai boxer has also been removed, sad to say. Somehow, the movie has make the audience wants to go for something more than 103 min version.