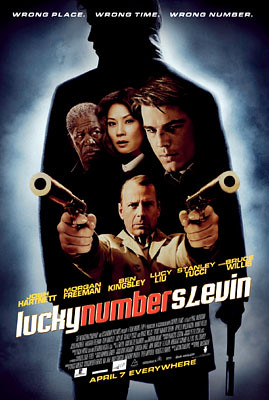 A case of mistaken identity lands Slevin (Josh Hartnett) into the middle of a war being plotted by two of the city’s most rival crime bosses: The Rabbi (Ben Kingsley) and The Boss (Morgan Freeman). Slevin is under constant surveillance by relentless Detective Brikowski (Stanley Tucci) as well as the infamous assassin Goodkat (Bruce Willis) and finds himself having to hatch his own ingenious plot to get them before they get him.

I’m not usually one to watch movies straight after they are released as I don’t much like the crowds, but I was at a pretty quiet cinema and the cast for this movie really attracted me, some real heavyweights with Bruce Willis, Ben Kingsley and Morgan Freeman in the same movie.

Plus it looked like my kind of movie, guns, killing, chicks etc.

It got a pretty good 7.4 over at IMDB and deservedly so.

The only bad thing I would say it did drag a little in the middle, but well perhaps this was due to the cinema being minus fifteen degrees and me losing the feelings in my hands..

The acting of course is sterling, with each character really developing their personalities and adding to the movie, Josh Harnett puts in a very strong performance carrying the movie through-out. It’s a fairly complicated movie jumping about from past to present with characters switching roles. Don’t be surprised if you feel a little confused after the first 20 minutes, it is an intricate but beautifully woven plot.

Sadly the ending was a little cheesy, I would have preferred if it would have ended a little sooner and finished with that hard edge, rather than softening it up and making me go ‘bleh’.

Bruce Willis seems to have perfected the psychopathic professional killer after playing Jimmy The Tulip in The Whole 9 Yards.

There is apparently some bloody violence in the movie, but I didn’t see any at all..the censorship was HORRIBLE with the censors completely missing the ‘fuck’ word and chopping out the remaining half of the sentence, the censorship was jerky, choppy and downright amateurish. It bordered on ruining the movie which was so beautifull directed and casted..

This is a movie that had an 18R rating at the cinema, over 18’s only, WHY did they feel the need to censor it so heavily?

It’s a caper movie though at heart, and it’s Hartnetts movie even with the heavy weights in it, a nice black comedy, bit of action, few laughs and a well told plot.

I’d definately recommend it, and it would be too cliche to give it Slevin out of 10..