So after having lunch back at Angkor Wat, and wondering around the stalls for a while, we headed off to the next temple, Ta Keo.

Ta Keo is an incomplete temple in the Khleang style built as the state temple of Jayavarman V. It was dedicated in 1000 but work was later abandoned, with little decoration applied.

Ta Keo is another mountain style temple dedicated to Shiva, the mountain with the golden peaks. It’s quite a plain but very majestic temple, the decorations stopped quite early though so there are only a few carvings. 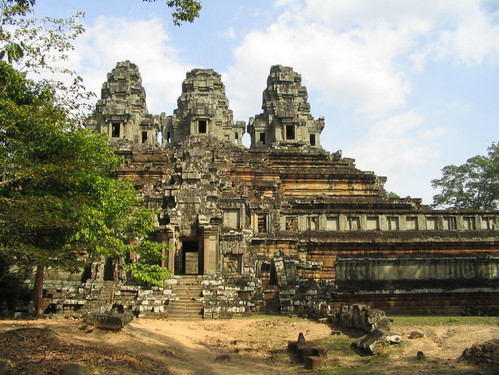 You’ll have to bear in mind I was running out space of my Camera by now, so pictures get fewer 😉 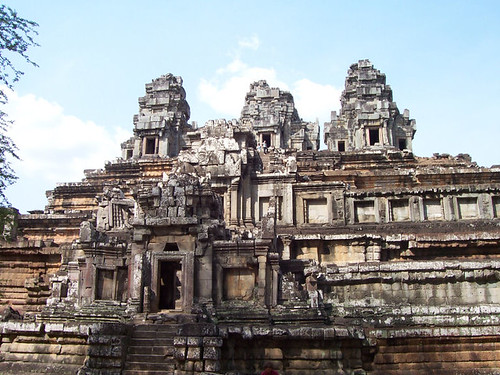 After that we trekked over to Ta Prohm, one of THE most famous temples in Ankgor Wat in recent years, for a quite different reason. This is where first Tomb Raider movie was filmed.

Ta Prohm is a temple at Angkor, Cambodia, built in the Bayon style largely in the late 12th and early 13th centuries. Located approximately one kilometre east of Angkor Thom and on the southern edge of the East Baray, it was built by King Jayavarman VII as a Mahayana Buddhist monastery and university. Unlike most of the other Angkor temples, Ta Prohm has been left in much the same condition in which it was found: the photogenic and atmospheric combination of trees growing out of the ruins and the jungle surroundings have made it one of Angkor’s most popular temples with visitors.

It is an extremely atmoshpheric place, and makes you feel like a real jungle trekker, until the horde of Japanese college scream past you to take their ‘Toom Layda’ pictures. 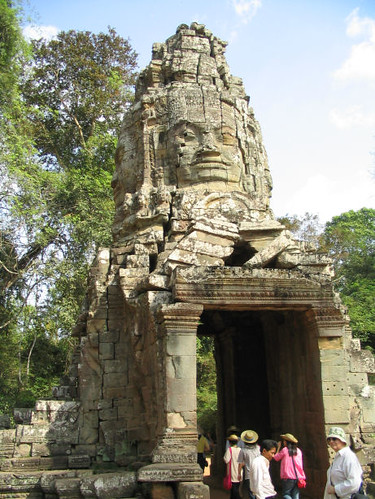 The temple is partially restored, so it’s not completely wild like Beng Melea, but it is amazing, and very unique.

The temple is propped up all over the place to stop the large roots from tearing it apart. 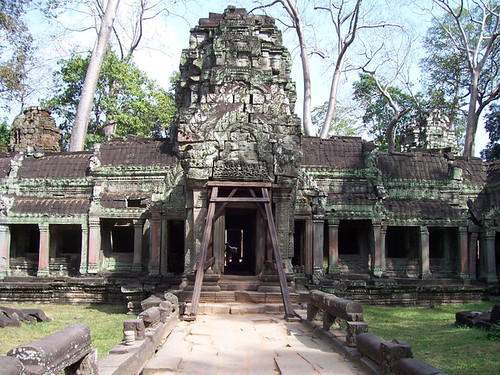 The trees literally pour down the walls like water. 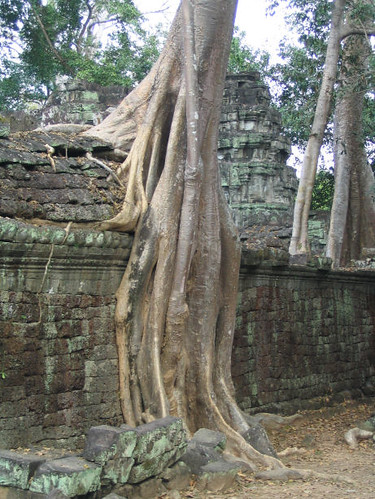 There is a mix of Silk Rope trees and Fig Trees, quite often with the Fig Trees growing over the top as they do.

The trees are massive and some are 3-400 years old..(Yeah opportunity for gay pseudo-Japanese pose, KAWAII!!) 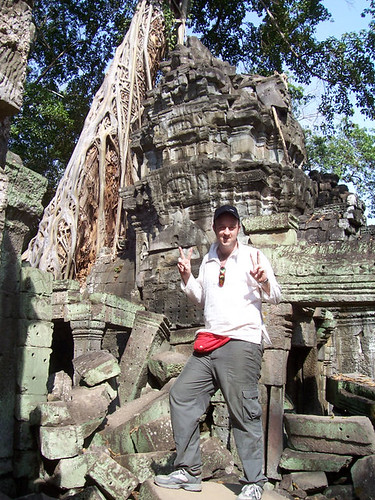 The roots of Ta Prohm.. 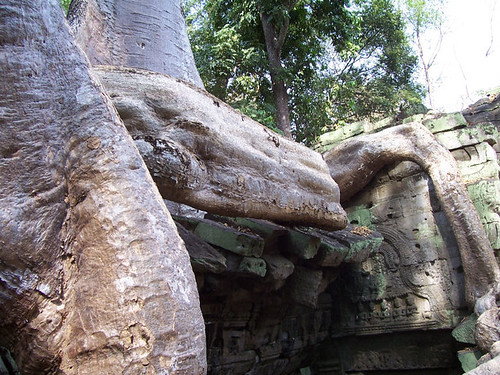 It’s a sprawling temple, with a lot of it fallen down, you can spend quite some time exploring the dark tunnels and root filled corners. 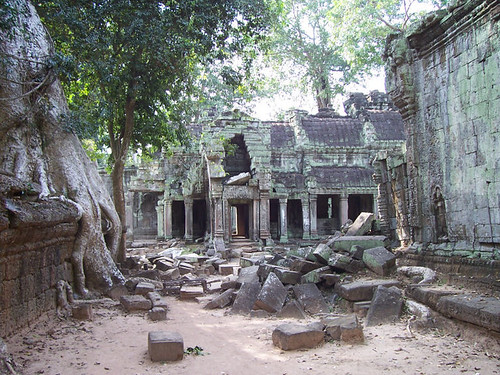 After that it was a quick stop in Banteay Kdei, but no pictures, because no more space!

Banteay Kdei is a temple at Angkor, Cambodia. It is located southeast of Ta Prohm and east of Angkor Thom. Built in the late 12th to early 13th centuries, it is a Buddhist temple in the Bayon style, similar in plan to Ta Prohm and Preah Khan. 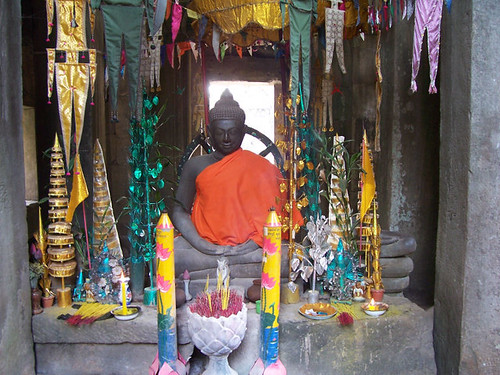 After that, we decided to head to the Old Market to check out the goodies, I wanted to get a couple of nice Oil Paintings as I’d seen some beautiful ones around.

I’d already picked up an Apsara and a Buddha at one of the less touristy temples where the wasn’t many customers (at a very good price). Will talk more about souveneirs later.

Extremely dusty as they are resurfacing the roads, and it’s dusty at the best of times. 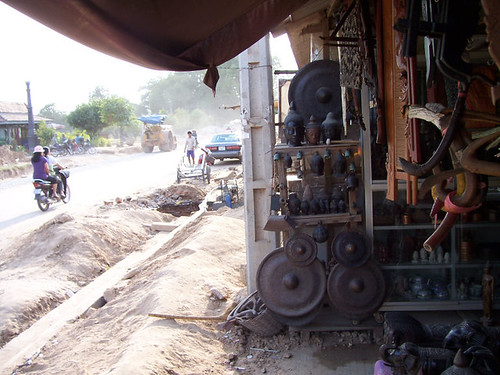 There’s a wide variety of stuff, at reasonable prices. You don’t have to push these people around so please don’t haggle like you are in Thailand. They are soft, humble people, so bargain gently, and don’t try and rob them for every last cent…they are VERY poor people. In the Market they are slightly better off, but those you see selling things in the temple complex have had most of their rights taken away, they can’t farm and are subsistence living, so don’t barter over $0.50 with someone that makes $2 profit a day, just give it to them ok? 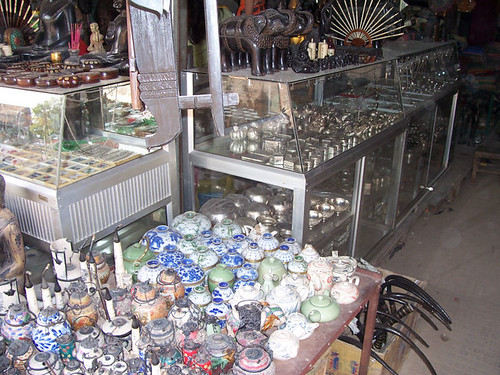 After that it was off to the main street, near the Old Market for some $0.75 beers! 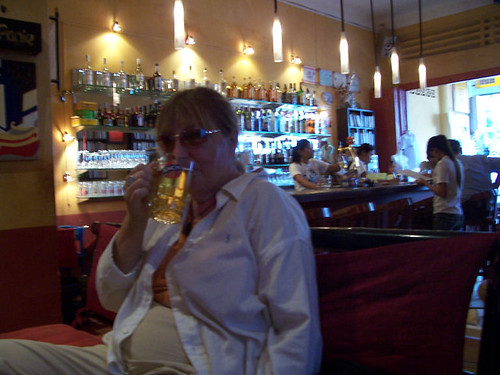 Then off back near the Guesthouse to a very nice Thai restaurant called Sawadee (Around Wat Bo Road area). 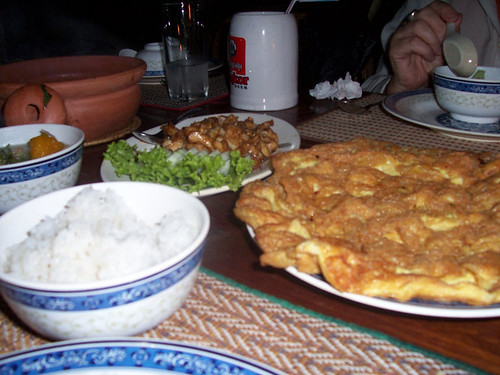 Then a good nights sleep, ready for the next day of adventures!