The recommended place after lunch is Angkor wat, the premier time for coming out of Angkor Wat is about 2-3pm, when the light for pictures will be PERFECT and you’ll get the picture postcard of Angkor reflected in the lake in front of the temple.

Angkor Wat (or Angkor Vat) is a temple at Angkor, Cambodia, built for king Suryavarman II in the early 12th century as his state temple and capital city. The largest and best-preserved temple at the site, it is the only one to have remained a significant religious centre–first Hindu, then Buddhist–since its foundation.

It is breathtaking, honestly you can even imagine how tremendous it is, until you stand in front of it, in awe.

But REALLY it’s not the same as standing in front of it. I mean the freaking moat is 180m wide, YEAH THATS RIGHT BITCH 180 FRIGGIN METRES. Makes our European moats look like trickles of piss in the sand. 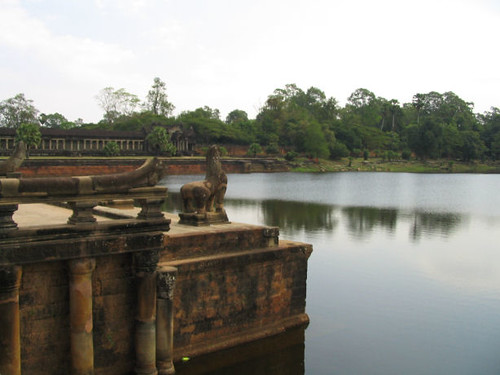 It is of course a world heritage site. 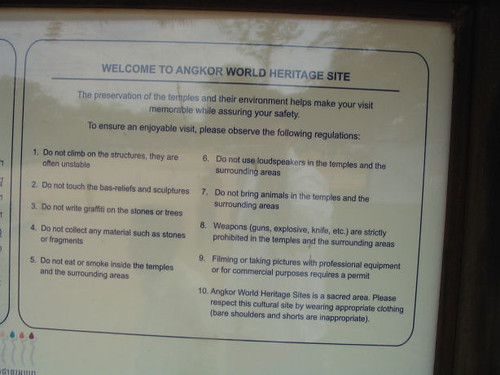 There’s still plenty of reminants of the Khmer regime with bullet holes all over the place, and some damage from heavy ordinance too, pretty sad to see how people can disrespect the ancient culture like that. 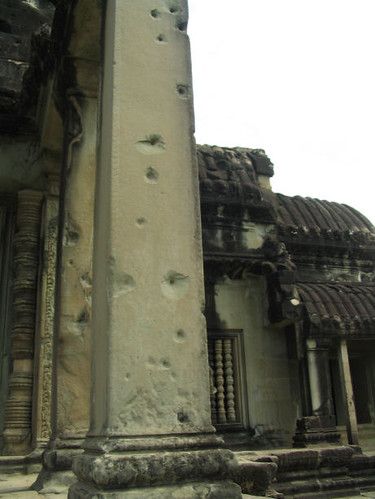 There are, of course, beautiful Apsara everywhere again. 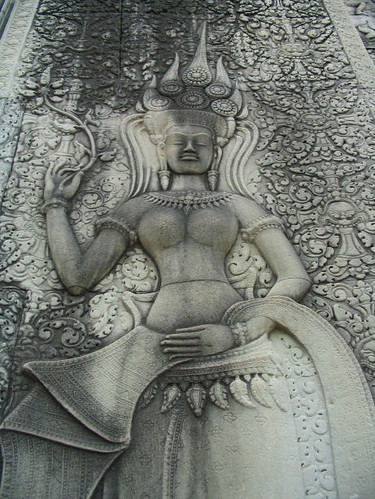 There’s nothing like walking up the paved way to Angkor Wat. 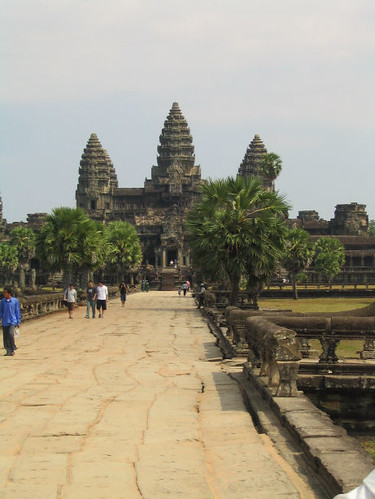 The Bas Relief are very long and VERY detailed telling epic stories on each of the 4 sides of the main complex.

Bas-relief is a method of sculpting which entails carving or etching away the surface of a flat piece of stone or metal. The word is derived from the Italian basso rilievo, the literal translation meaning raised contrast. To explain simply it is a sculpture portrayed as a picture. The portrayed image is raised above the background flat surface. 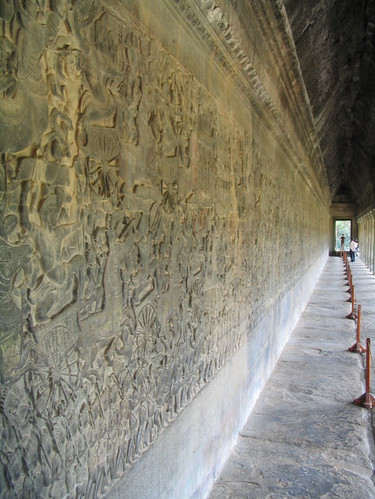 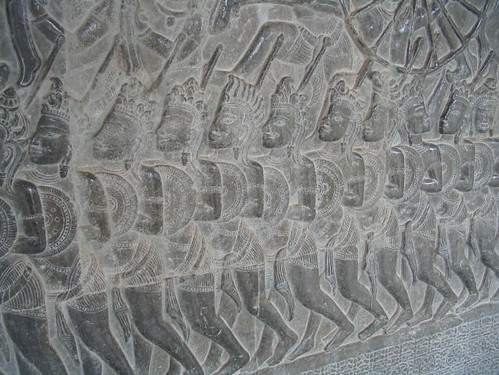 With fascinating Hindu legends such as the demons and the gods uniting bound together by the snake Naga to churn the Sea of Milk for the elixir of immortality. 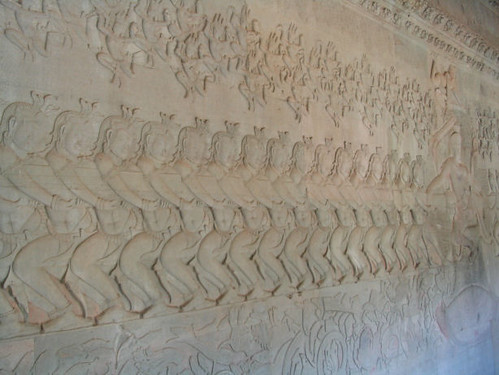 On the eastern gallery is one of the most celebrated scenes, the Churning of the Sea of Milk, showing 92 asuras and 88 devas using the serpent Vasuki to churn the sea under Vishnu’s direction (Mannikka counts only 91 asuras, and explains the asymmetrical numbers as representing the number of days from the winter solstice to the spring equinox, and from the equinox to the summer solstice).[32] It is followed by Vishnu defeating asuras (a 16th-century addition). 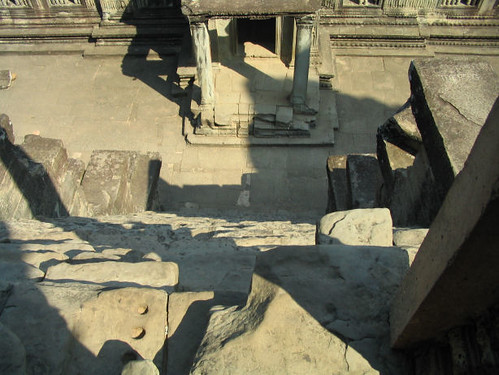 I sat here for quite some time, just taking in the peace of ancient feeling of the place, and admiring the view of the untouched jungles. 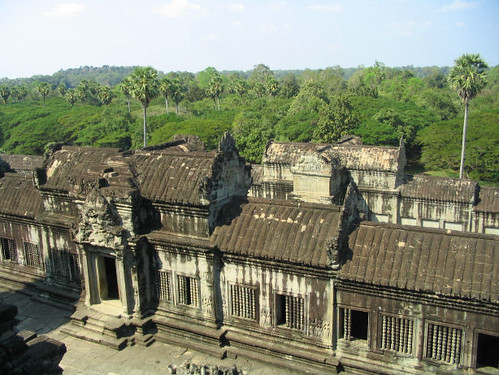 My Mom of course, totally LOVED it. 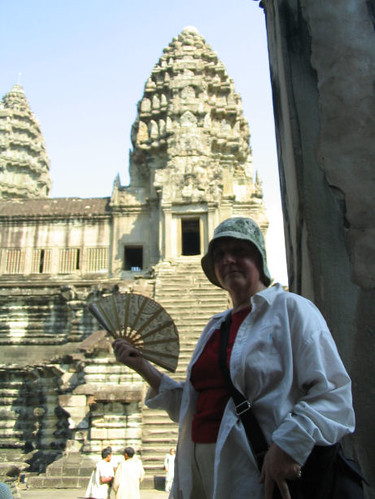 This is the famous Angkor Wat postcard picture, this is one of my favourite pictures of the trip. 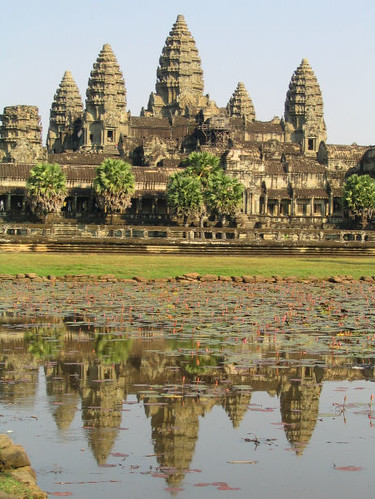 And yeah, just to prove I was there and I didn’t steal the pictures 😛 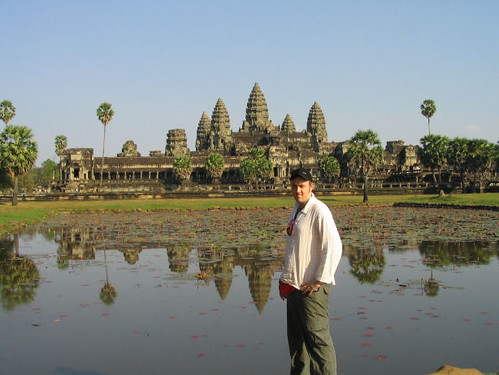 It’s pretty tiring, and a lot of walking and huge steps involved.

After Angkor Wat, we headed up to Phnom Bahkeng for the sunset over the grand lake Tonle Sap, it’s the most famous place for the Sunset in the Angkor complex.

The rulers of Angkor constructed many temple mountains, but Phnom Bakeng is all natural stone. The temple on the summit was built in the late 9th or early 10th century by Jacawarman I (or Yasovarman I). At the top of the hillock are 5 successive rows of 12 sanctuaries each. Here the Royal Linga – phallic symbol of the King in his divine state – was placed.

Sunrise over Angkor Wat is supposed to be spectacular aswell.

It’s quite a steep path up to Phnom Bahkeng, so be prepared. 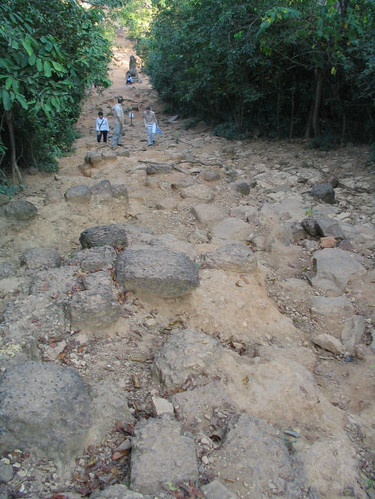 You can see Angkor Wat from the top too, the steps are huge though, so it’s more of a crawl to get to the top of the temple.

Unfortunately it’s become ‘the’ stopping place for the sunset especially on huge group package tours *sigh*, luckily our guide is smart, and took us there very early, around 4pm, before anyone was there, sunset was at 5.45pm.

So we had a good hour of peace before the unwashed masses started arriving. 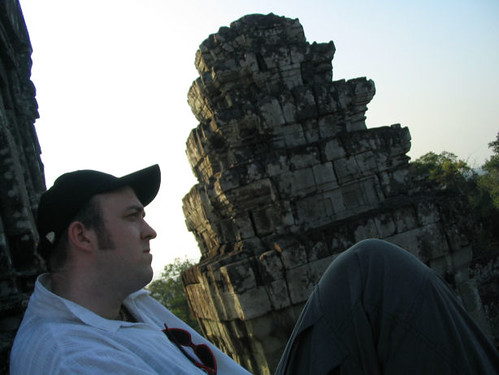 As you can see by the crowds, not a good place to be, so I left before the sunset. 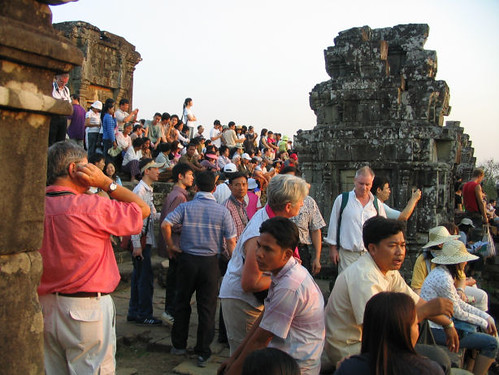 I did manage to get a fantastic picture anyway, which is my new wallpaper. 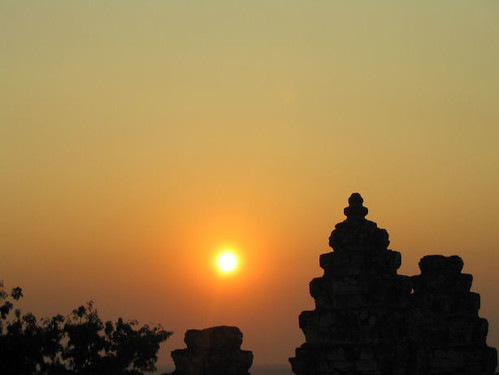 Make sure you have loads of insect repellant on if you stick around for the sunset, mozzie heaven! Oh yah, you’re supposed to take Malaria tablets before you go too, so check with your local doctor for what’s best for you.

After that was back to the Guesthouse for a nice shower, write down the days adventures, check out the pictures and a similar dinner as last night (With beer of course!)