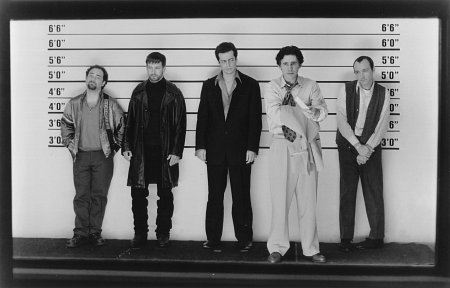 Five villains in New York are rounded up by police in an unconventional manner that worries them. After release, they get together for a spot of revenge, but someone else is controling events.

Now I was shocked to find, some of you youngsters have not watched this film…not heard of it! To me that’s a travesty…your great films of the 90’s were Titanic and The Beach, I mean it’s not even *THAT* old, it’s from 1995.

It’s ranked as number 19 of the top 250 films. If you haven’t seen at least half of these movies, you are missing out..

I personally love this movie and have seen it many many times, you get absorbed by it each time, drawn in and rung out.

It’s one of the most original stories you’ll see as it’s so unique no one could mimic it and get away it without people labelling it a knock-off of The Usual Suspects[/url].

It’s suitably dark and engaging, intruiging and plays on myths, I still remember the first time I watched it and it rendered me speechless. It’s almost flawlessy scripted, and if you watch it over and over you will still get caught up.

I just wanted to bring this movie up, and say if you haven’t see it, WATCH IT NOW.

It’s actually one of the original DVD’s I have, the 2-disc special edition.

28 Responses to The Usual Suspects