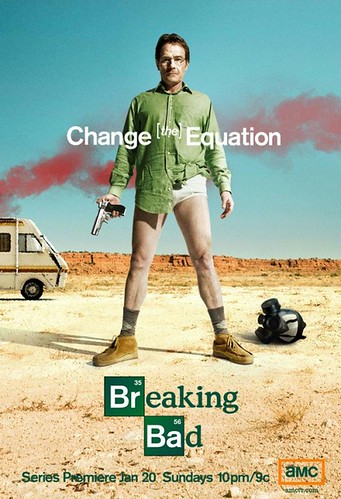 A drama about a high school chemistry teacher who’s suffering from the world’s worst case of mid-life crisis and becomes a criminal.

As you probably know I’ve become quite a TV Series Junkie and have been rabidly looking for new awesome shows to watch.

I guess it’s partially do to with the fact movies in recent years have mostly been disappointing, there hasn’t been that many great movies or new movie series to get interested in.

One of my UK friends recommended I start watching Breaking Bad, he was the one who told me I should watch The Wire – which I still maintain is one of the best TV shows ever aired. Breaking Bad starting airing in 2008 and has just completed its 3rd season and all of us fans are eagerly awaiting the 4th season coming in 2011.

And simply put, is a superb piece of Television in every way. It’s almost like a prolonged movie, the same kind of feeling you get from The Wire and Sopranos. It’s deeply involving, very dark and extremely realistic. The street life isn’t glamourised or stereotyped, it’s just very much how it happens in reality. The characters are inspired, especially Walter H. White played masterfully by Bryan Cranston (best known for playing Hal in Malcolm in the Middle.

The chemistry between him and Aaron Paul who plays the particularly useless Jesse Pinkman is just fantastic. Walter White is just such an intense character, he has his funny moments and watching him sometimes can be heartbreaking. 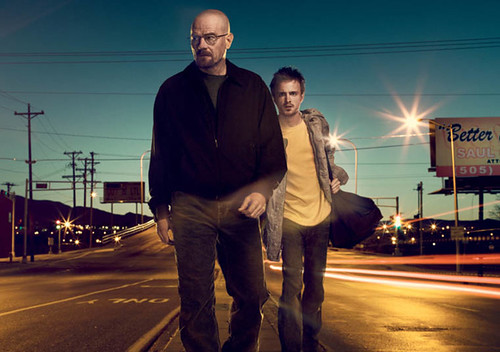 The series in general isn’t super complex like Sopranos which has at least 2-3 layers of sub-plot at all times and is constantly throwing in new characters. Breaking Bad is a true masterpiece in character study, there aren’t a whole lot of characters and complexities. There is a main group of people that the series focuses on and a few more peripheral roles and transient characters who come and go.

There are some nice twists, some very interesting events and thankfully it doesn’t do that stupid cliffhanger thing at the end of each episode – which the US tv shows generally seem obsessed with. Probably because they don’t need to, it’s just so well written, well filmed and well produced you just HAVE to watch more even without a cliffhanger.

I love the way it’s shot too, it’s not overstylised, not pop style, it’s almost like watching a very nicely shot documentary.

The pilot starts out at such a frenetic pace you really wonder how they are going to keep it up and top that, but it dissolves itself wonderfully into the back-story and then proceeds to go forwards from there.

Truly Breaking Bad is a masterpiece and I hope we see another 2 seasons to give it a nice round 6. It’s definitely a show that can stand up to repeated viewings as it’s not gimmicky or trying to be deep. A testament to that is that this show has WON 6 Emmy Awards (it has won in all 3 seasons 2008, 2009 & 2010) and has had a shitload of other nominations.

If you are looking for something new to watch, you like drama style series, you can take fairly dark content and you want something original and different – perhaps it’s time you checked out Breaking Bad.

Successful Blogging (If You’re Lucky) – Some Tips To Get You Started
Happy 2nd Birthday To BFM Radio – Bloody Fantastic Music!