This is gonna be an oldskool style blog post with some shitty pictures I uploaded to Twitpic from my phone and a load of random jabbering, so there you go.

Anyway I’ve been super busy lately, and well this week just topped it off by getting more and more crazy as the week went on.

On Wednesday had to go the doctor’s as my foot was just getting too painful, it’s been hurting for a while but I wasn’t sure what it was. I thought it might be a veruca or something similar, but it ended up being a submerged splinter or some kind of debris in my foot which had resulted in a pressure pad (which was very paintful). 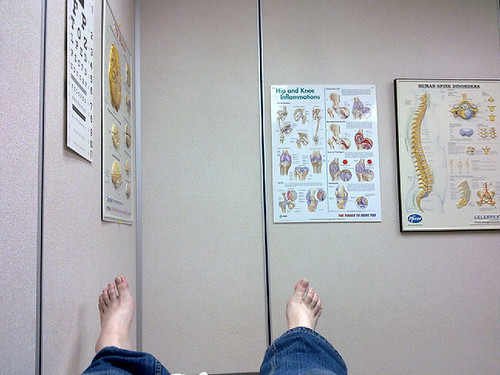 So I had to spend a good 45 minutes with Dr. Leong staring at my foot and digging a hole in it with scissors and a needle..the procedure wasn’t so bad but bloody hell the local anesthetic jab in the foot is one of the most painful things I’ve ever felt. It’s feeling much better now tho, just have to wear shoes with innersoles and try and get balanced pressure back on my foot.

On Thursday morning before work I had to limp over to my new house to choose where to put the power points and light points along with the other stuff (water heater, aircon, fans, astro, tv, telephone lines etc.). 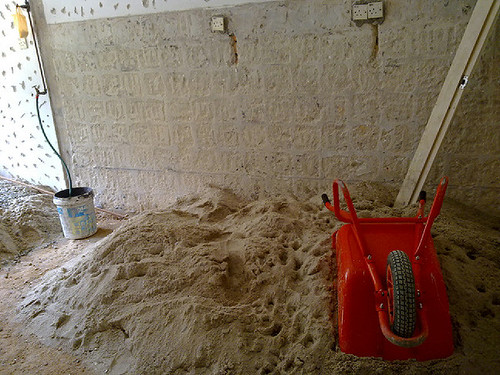 Also stayed up to about 2.30am the night before studying the floorplans and choosing where to put everything. Of course they had to be slightly adjusted when we viewed the house, but at least we had the groundwork and a good idea of what we wanted.

Then straight after work that night I headed to Aaliyah in Damansara Heights for a Project Alpha dinner with the sponsors.

Friday morning took #emocharlie to the sitters before work..then work. 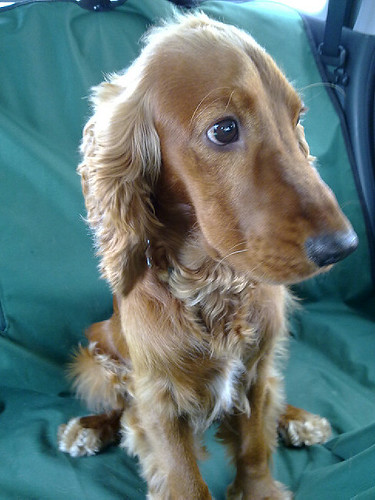 Then back home again then off to #StPats day at 1-U for a night filled with Guinness and unfortunately rain. It was a great event though with a real carnival atmosphere, plenty of drinks, food and a comedy tent. Lots of live bands, dancers, clowns and all kinds of entertainment. 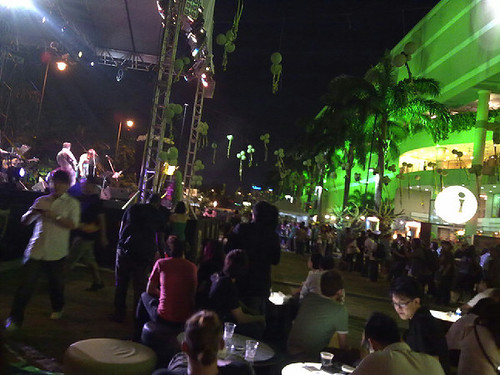 Headed back fairly early as we needed to head over to Jalan Cheras (National Badminton Station) to visit the site for the weekends events and do some recce work and hang some banners for the sponsors. Headed back home about 1.30am to prep my camera gear for the next day. Slept around 4am.

Up early next morning at 8.30am and off to the stadium again for the event, had to drop by the new house again for a few minutes as the contractor suggested one of the water heater positions was awkward and he wanted to us to see a better position – he was right so we agreed then off to Jalan Cheras we went.

The event in question was the 1st All Asia Kyokushin-kan Karate Championship 2010, it was a 2 day event with the first day being mostly Kata (forms) and the second day Kumite (full-contact fighting). 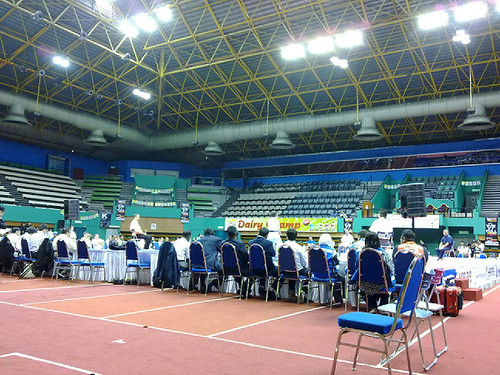 The first day wasn’t so important, nor so interesting for taking pictures so we managed to head back home about 4pm and grab a nap. Woke up about 8pm and headed over to Eyeris place for an awesome BBQ and semi-birthday celebration.

Thankfully there was no rain, good crowd, good music, plenty of beer (some Absinthe) and ridiculous amounts of food (pigs in blankets, lamb leg, pork ribs, steak, mushrooms and much more). Great work by Lance and BBQ Addicts. 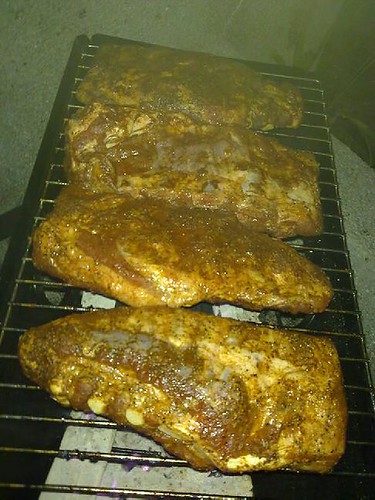 After that back home again and sleep for the next mornings events. A long day at the tournament finished around 7.30pm after tear-down then off to dinner. I’ll blog more about the event later with the official pics I took, the fights were quite exciting and they really were walloping each other. And yes I worked the whole day on my birthday..that’s a first, but renovation funds come first right now!

Once wrapped we were super hungry, and for some reason I really felt like having a massive slab of steak so off to Jake’s we went in Damansara Heights again and my dream came true.

The awesomesauce 600gm Australian Wagyu Beef Steak was my birthday present from Kimberlycun and it made me smile all the way home even though I was tired MAX. You can see I’m still wearing the event shirt K3+. 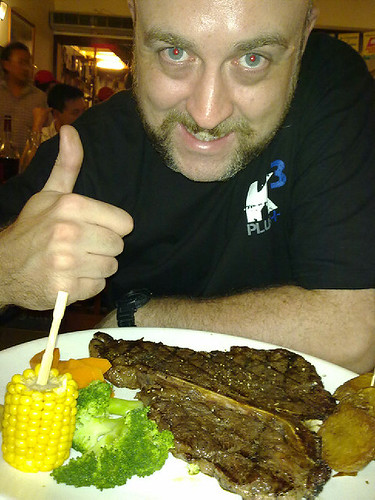 I got home and really couldn’t keep my eyes open, I passed out without showering, changing clothes or doing anything else other than falling into the bed at 10pm and closing my eyes. And that’s how I spent my 32nd birthday!

And well here I am, feeling pretty good today apart from this shitty laptop at work which keeps over-heating and shutting down if I open more than 2 applications. Got a possible existing new project coming up at work though involving a transition to WordPress – something which I’m pretty handy at 😀