Sunday is a sacred day for me, for eating pizza and watching movies. Plus the odd other activity like playing PS2 (I’m at the final race on NFS:Carbon finally) and processing some pictures (didn’t manage to do any today – slept too much).

But I had to go out this Sunday to Laundry to meet Tim for some football match as apparently Maxis has secured the sponsorship rights for EPL for 3 years, so they were having a little get together.

The sponsorship will start with the Community Shield match between Manchester United and Chelsea to be aired live over ESPN at 9.55pm on Sunday.

That was the game we were there to watch, not that I give a shit as you know I don’t really follow football.

Anyway, to get back to the point, imagine my surprise when I went out to my car to go to Laundry bar…to find this: 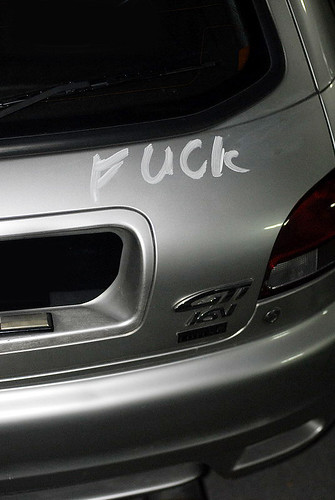 No your eyes are not deceiving you, that is indeed my car with FUCK painted on the back.

I wonder who I offended? If I did offend anyone as it’s not a very clear message FUCK? FUCK WHAT?

Or perhaps most likely

Perhaps so…thankfully it’s some kind of water based paint so it just wipes off without any effort. 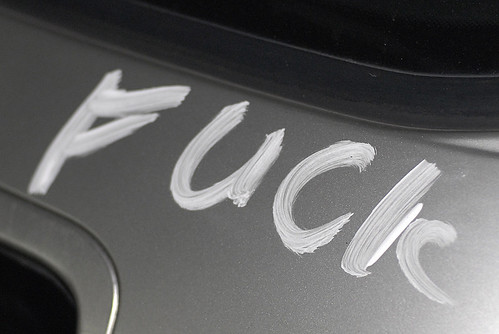 But still I find it very odd, at least it’s not as bad as last time when my car was vandalised, or when the window was ripped out and my camera stolen.

I’ve seen or heard plenty of stories about disgruntled wives and girlfriends chucking paint on cars, or in the interior.

But for a random stranger to paint fuck in water based paint on the back of a car in such small and neat letters? So weird.

Do you think it was the Nismo owner from the below post?!

NISMO – At least it’s a Nissan this time
Ultimate Comb-Over – The best evar!