Narnia – The Lion the Witch and the Wardrobe 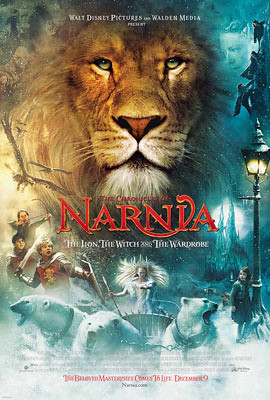 Based on the classic novel by CS Lewis. Four London children are sent to a professors country home in order for protection during World War II. There they find a magic wardrobe which leads to a mystical land called Narnia, which is being ruled by an evil witch. To defeat the Witch, they must join forces with Aslan, the lion God of Narnia, and the great battle between good and evil.

I’ve been wanting to watch this film for some time actually as it’s one of the memorable stories from my childhood, the original book written by CS Lewis was penned around 1950, shortly after the second world war took place.

They really managed to capture the essence of the original tale and the direction and special effects were breathtaking, the blend of live action actors, puppets and CG is flawless and you aren’t really sure which is which, you are just taken in by the whole story.

I did notice it wasn’t given such a warm welcome in Malaysia, probably because not many people are familiar with the story.

I would say however it’s definately worth a watch, it is a kids story but I very enjoyed it nevertheless, it’s a very sweet story but exciting and mystical at the same time, with a good moral background of loyalty, bravery and camaraderie.

The acting is very good, and the characters are strong through-out the movie, you can see each child has a distinct character, then within narnia the battle of good vs evil.

Down with the Christmas Tree, up with the Twigs!
The Eternal Struggle

13 Responses to Narnia – The Lion the Witch and the Wardrobe