Grabbed some more lala last night, was very good, Malay style this time from some stalls near my appt, sadly the infamous chicken wings stall wasn’t open…so we missed out on that.

Caught up with some friends, one of which forgot to bring a drill so fixing the curtain rail plan went out the window, I guess we can do it tonight 🙂

Oceans 12[/url] just came out so we decided to go and watch that instead of re-hanging my curtains and moving the TV, far less effort, but with obviously diminished returns. 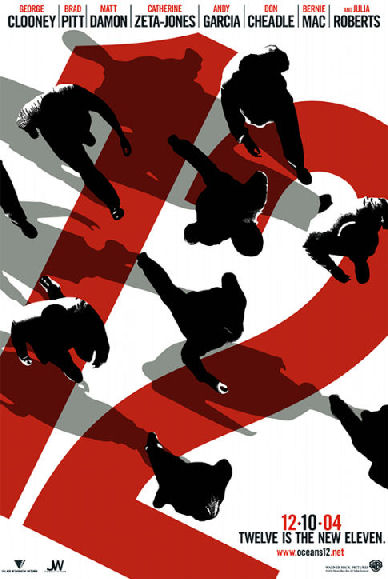 Not as good as the first one, but entertaining nevertheless. Worth a watch and guarantees a few cheap laughs and ‘woo that’s cool’.

Seems lacking in plot and the originality of the first one (inevitable), just cashing in on the big stars and the name of the first movie to make a shit load of cash. Don’t except any Oscar winning performances or stunning plot twists, it’s not a clever film, but it is fun.

Catherine Zeta-Jones did very well as usual and fitted in seamlessly with the rest of the cast, the performances were good as usual with appearances from a few more class actors (Bruce Willis, Albert Finney and Robbie Coltrane).

It’s pretty much the same as Bridget Jones 2[/url] though, it’s been americanised, commercialised, dumbed down and it’s lost the spark, wit and intriguing twists from the first one. There is some decent character development, a bit of romance and some stupid time wasting (script writer had a block?) like the whole Julia Robers episode.

The first film Oceans Eleven[/url] was very good for a modern remake, they really made the most of a fairly simple concept, the classic ‘Heist’ movie with the trendy ratpack actors.

To summarise this is definately style over content, it’s shot in a very ‘Indie’ style with cool actors, cool sets and cool clothes (Prada sunglasses anyone?). Worth a watch, if you enjoyed the first one you’ll enjoy this, just don’t expect too much, it’s no Bourne Supremacy[/url].

Found a cool Pentagon conspiracy link yesterday too, check it out HERE.

2 Responses to Oceans 12 and more Lala