So we’ve had a plan to get a treadmill since we bought this house, we even allocated a space for it on the upstairs landing and had a plug point put in the floor – especially for the treadmill. But due to the house, the renovation, then the wedding – we had no budget to actually buy the treadmill..

So the poor lonely power socket has been gathering dust for the past 2 years, and has only been used for steaming clothes, ironing and vacuuming. But a week or so ago, we were at 1-Utama to watch a movie and we happened to see the treadmill we’ve been looking at (actually a newer model) on sale at a pretty good price.

There’s not a whole lot of treadmills available for sale in Malaysia (fitness, what?) so we have limited choices, we ended up getting a NordicTrack T8.0, which honestly doesn’t have great reviews. But it feels comfortable and has decent features (28 workouts, mp3 line in, fan, incline etc).

Last week we had it delivered and set up 🙂 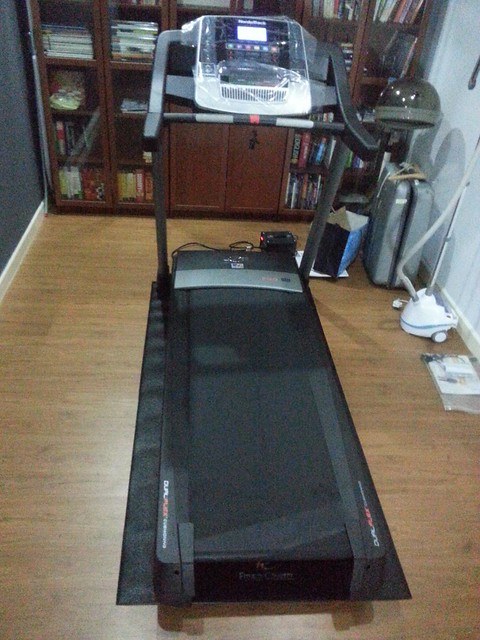 And honestly I had no idea where to get started, so I did some googling (as per usual). After some reading I came across this program called Couch-to-5k, which seems ideal for me.

I’m not terribly unfit, as I walk my dog about 1.6km twice a day – but I’m not terribly active either and I certainly can’t sustain a decent running past a few minutes without collapsing. I do spend far too much time sitting in front of the computer.

Too many people have been turned off of running simply by trying to start off too fast. Their bodies rebel, and they wind up miserable, wondering why anyone would possibly want to do this to themselves.

You should ease into your running program gradually. In fact, the beginners’ program we outline here is less of a running regimen than a walking and jogging program. The idea is to transform you from couch potato to runner, getting you running three miles (or 5K) on a regular basis in just two months.

Sounds reasonable to me. So I grabbed the Android app here for US$2.99 and today I took it for a spin.

I collapsed after about a mile (15 minutes) of alternate jogging/walking. After some post work-out research, it seems my jogging speed is too fast for a beginner and I won’t be able to sustain the workout. I was walking at 3-3.5mph and jogging at 7mph, it seems like I need to slow it down a bit to maybe 2.5mph for walking and 4.5-5mph for jogging.

Perhaps I’ll be able to complete the entire 20 minutes then. But one thing is for sure, after spending the damn money on the Treadmill I am going to be able to run 5k continuously – and hopefully lose some weight in the process 🙂

I plan to do a real 5k race when I’m ready, the program should take around 8 weeks but I might take a little longer, there’s no shame in repeating days/weeks.