Some might have seen me as an Apple or iPhone detractor in the past and well perhaps I was especially the 1st gen iPhone – which whilst being a neat media device was a terrible phone and didn’t have 3G at a time when even the most basic phones already had the capability to go beyond EDGE connectivity.

By the time the iPhone 3G came around things were looking better, but there were still very basic functions missing. The appeal of course was the growing Appstore – an app for anything you could dream of, and apps to solve problems you didn’t even know you had – all for only $0.99! Much like shopping at the RM5 shop Daiso – you’ll find things you never even thought could exist.

And well when the iPhone 3GS came out, I started to think it was a reasonably capable phone – but there was still a big issue for me. The camera did indeed take nice pictures (in reasonable light) but there was no flash, and to me a camera-phone with no flash is near useless.

Then finally, along comes the iPhone 4…WITH FLASH! I’m not going to list out the specs here or a bunch of product pictures as you can find those anywhere online. Nor will I share an ‘unboxing’ video or a bunch of pictures of what is inside the box. This is more about my experience with the phone, and what it has been like using it every day for the past few weeks or so since I got it at the Maxis iPhone 4 launch. 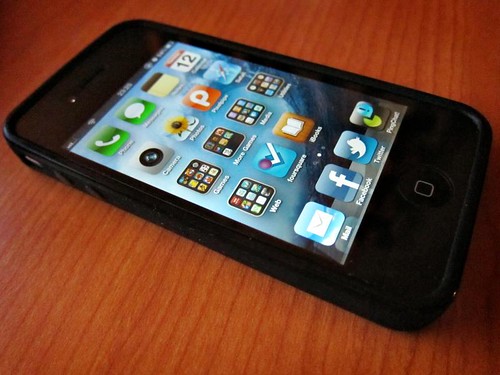 The one thing that worried me immediately when I got the phone was the fact it was glass…glass edge to edge – both front and back. Having experienced dropping my phone before I thought it wise to immediately buy a rubber case and a screen protector for both the front and back, which you can see in the picture above. Although the front screen is tough and scratch resistant gorilla glass, the back is not so it’d be wise to protect it.

Looks wise though, it is a fine looking phone with the gorilla glass and stainless steel band – the screen is the first thing that strikes you. Yes the so called ‘Retina Display’ has an impressive 960×640 pixel IPS backlit LCD screen and truly is sharp and bright, one thing I discovered shortly after using the phone is that it automatically adjusts the brightness – I really LOVE this feature especially when surfing or reading on the phone in a dark place as it really dims down the screen so the harsh glare doesn’t hurt your eyes.

As for using the phone, I did find it a little difficult at first as this is the first Apple product I’ve ever owned. Plus the fact there is no instruction manual, you have to work out what the buttons do on your own. It took me a while how to bring up the multi-tasking bar (double tap the home button) then hold down on the icons to kill background apps. 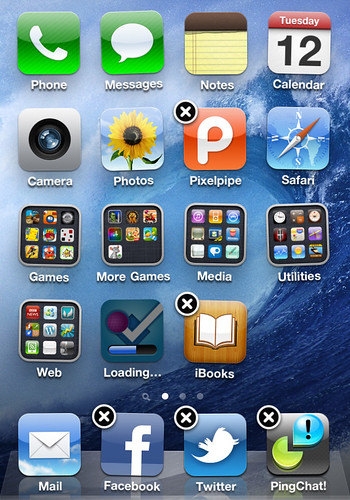 Calling and SMS is now much improved and pretty straight forward, I’ve had no issues with the whole ‘antennagate’ thing. So far the phone has generally been stable, some apps crash (Pingchat! for example is BETA software and seems quite unstable) but it doesn’t hang the whole phone. Syncing my phone book and calendar with Gmail was painless, pushmail works fine as do push notifications for Facebook. The official Twitter app is missing push notifications but it’s fine as it’s less of a battery hog.

When Godfinger was spamming me with push notifications my battery only lasted half a day, but now with that turned off I can easily go from morning till fairly late at night (2-3am) without charging so the battery life is much improved over previous generation iPhones.

Overall the simplicity is great, everything is easy and just works. Tethering for example is as simple as enabling the option on the phone and then plugging it into your PC – you don’t need any suite, any special software or do anything really..it just works. Plus it works over USB and Bluetooth. 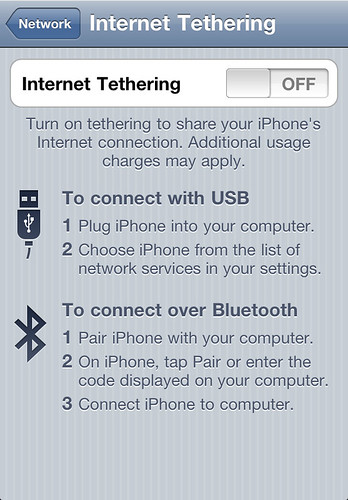 I also enjoy the fact you can browse the Appstore and iTunes on your desktop and download apps using your home broadband line – then just plug your phone in and it’ll sync everything up. No complicated options, no backup configuration – it just takes care of it. 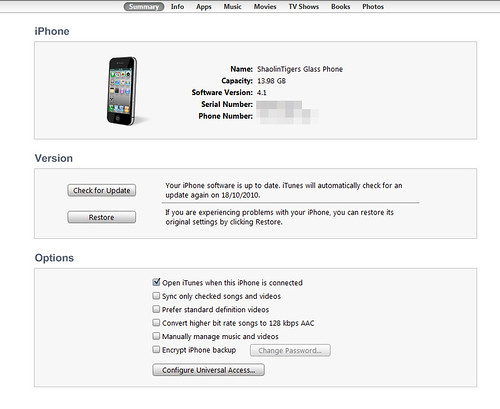 When I first got the phone I also updated the firmware from 4.02 to 4.1 and it was a painless experience. As a fringe benefit, I also discovered the massive selection of online streaming stations built into iTunes – currently enjoying all the EPIC 80s stations. 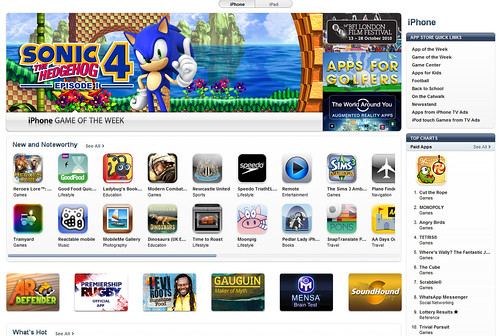 Even in saying that, browsing and installing apps from the Appstore on the phone is also extremely easy and extremely dangerous for your credit card if you have poor impulse control. Everything looks so cool and shiny and it’s only 59p or $0.99 a pop! Thankfully there are a plethora of free apps and more commonly a ‘lite’ version of most paid apps so you can try them out first. Or if you’re a miser you can just play through all the games using the lite versions as there are thousands to choose from. 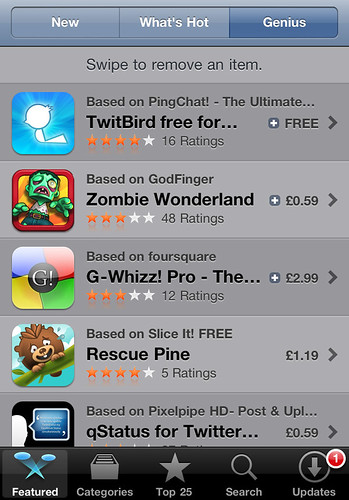 Media wise it’s good, honestly I’m not a big consumer of music and videos on my phone so I can’t comment much on that. I’m sure it’d function just the same as an iPod touch though – which is a great media device. The thing that surprised me was iBooks, I thought it’d be all controlled by DRM and using some weird proprietary format – but no! It supports both .epub and .pdf files and it’s actually a really good e-book reader. I’ve read about 6 books since I’ve got the phone and I haven’t been reading regularly for quite some time now. It’s useful to have a library in your pocket, rather than having a dedicated ebook reader you can just delve in and out when you have 5 minutes to spare. 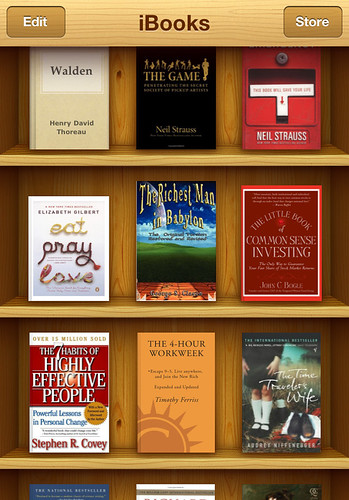 There’s a ton of other stuff you just discover whilst using the phone too – like for most things a swipe to the right will give you an option to delete an item, for many apps physically shaking the phone reloads/refreshes.

As for the stuff you download and setup straight away, it was all simple to do and went without any issues (Twitter, Foursquare, Facebook, E-mail, WordPress app etc).

Image quality from the camera is decent, my recent post about Oktoberfest – all the pictures were taken with the iPhone 4. I do find at times it tends to over-saturate the pictures a little, but then that’s what makes the images pop. I’ll do a more comprehensive post about the picture quality later (and other stuff like how the HDR feature works and the flash) and compare it with some other camera phones, being a photographer this is an area of interest for me. You can browse through my Twitpics too, they are all taken with the iPhone since the end of September. I’ll also record some video samples and post those up too.

I’ve had is some weird Wifi quirks where it won’t get a DHCP lease and defaults to the private 169.xx IP range. After rebooting the router it worked again, but obviously I can’t do that for public Wifi. It has been widely discussed on the Apple forums and I hope they address it with a future firmware update as Wifi is rather important especially when you want to use data in foreign lands. The other downside is one which everyone is already aware of, the requirement for proprietary accessories – now all mobile phone manufacturers are using Micro USB chargers as a standard…iPhone of course isn’t – you still need the Apple dock connector to charge and connect your phone to the PC. Of course there are a whole bunch of 3rd party accessories out there now, so it’s not as costly as it once was – example being I picked up the rubber casing and a good quality car charger for RM65.

Overall sometimes I find things a little TOO simple, but then I am a power user and on the flip side I appreciate the stability and easy of use the simplicity brings. Generally it’s a pleasure to the use the phone, it does what it’s supposed to do and it does it well.

I give it a thumbs up, if you want to get yourself an iPhone 4 you can check out the deals/rates from Maxis here:

17 Responses to The Latest Buzz – Apple iPhone 4 – My Review