Well judging by the face of the fans after the drawing 0-0 in Algeria game what do you think? 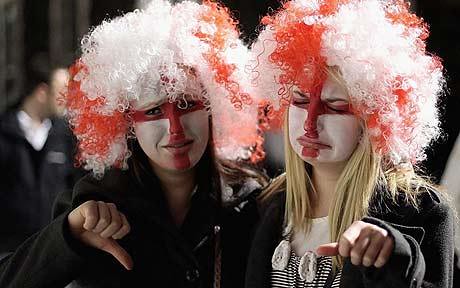 And drawing 1-1 with USA…honestly it’s not looking very good is it? Rooney was pissed off with the fans, and the fans were pissed off with Rooney..which The Sun labelled the Roo-Boo-Zela LOL. He wasn’t really best pleased was he?

Anyway the group standings right now put Slovenia at the top with 4 points, USA & England tied with 2 points and Algeria at the bottom with 1 point. Honestly I’d like to see both the USA and England win their last games and both go through.

I have some glorious memories of the World Cup, like when the World was introduced to a very young Michael Owen in the 1998 World Cup when he scored one of the goals of the tournament against Argentina and Beckham was in prime form.

And some sore memories too like when Beckham got sent off for kicking Simeone right in FRONT OF THE REF and ruined our World Cup chances and believe me 1998 was one time we actually had a decent shot at getting to the finals.

The latest news was that John Terry the disgraced ex-captain was rallying his team-mates in an uprising against Fabio Capello, which failed.

I mean I think he was right to question Fabio, but no so publicly. England are just playing shite, Rooney was invisible in both games..at least ‘Calamity’ James didn’t make any shockers..but to be fair he got that nickname a LOOONNGG time ago and it’s a long time since he’s had a bad game.

The ball is causing a lot of debate too and honestly there are far too many crosses going long and shots going over the bar from World Class players for people not to question the Jabulani.

Then there’s the contentious issue of the Vuvuzela, the droning noise that blares out from your TV every time you watch a World Cup match.

Anyway back to England, I honestly didn’t have much hope even before the World Cup started…but after seeing them play I have to say frankly it’s quite depressing for a team with some truly World class players to play…like that? Rooney is acting like one of the best players in the World, but isn’t playing like one!

They should have beaten USA soundly and slaughtered Algeria like Portugal did to PRK.

But there have been plenty of upsets so far, Switzerland beat Spain, Serbia beat Germany, Mexico beat France and New Zealand held Italy to a draw..it’s been nuts so far.

The maddest of all is Group H where it’s very probable 3 teams will end with 6 points…imagine getting 6 points in your group and NOT going through – that’s going to happen to someone.

Plus then the whole France drama with their ‘star’ Anelka being sent home and their fitness coach fighting with Patrick Evra following the team director quitting.

I’d say France has pretty much taken themselves out of this World Cup, but then with the strange results that have been coming in..who knows.

The only teams that have been performing as expected so far are Argentina, Netherlands and Brazil.