Some say its a form of Body dysmorphic disorder or BDD, these guys always think they are too small, not buffed enough, not big enough…they turn to steroids and other stuff like Synthol (Site Enhancement Oil) just to make them look bigger. 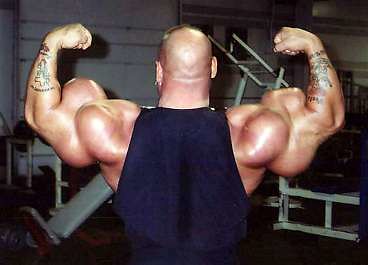 Site Enhancement Oil (SEO) or Synthol is a liquid substance, usually a mixture of oils, used by a few bodybuilders to increase the apparent size of some muscles. The effects of SEO are purely and solely cosmetic. It is injected either under the skin or between the muscle fibers.

You can find some more freaked up people using Synthol here.

Weird stuff, stay away from Steroids, lest you might get bitch tits, roid rage and balls the size of peanuts.

In the case of Gregg Valentino, the freak….he has the biggest arms in the world and they are damn ugly, this guy has napoleon syndrome AKA short man syndrome.

Quite possible the most hated man in body-building. 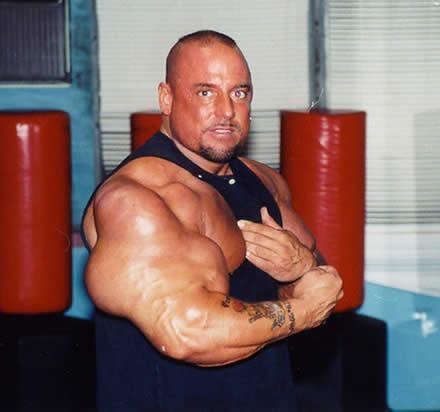 Valentino was featured in “The Man Whose Arms Exploded”, a TLC documentary highlighting the use and abuse of steroids. In the documentary he recalls his misuse of steroids, namely not taking precautions necessary to prevent infection. Consequently he eventually came down with a very serious infection of his right biceps. After failed attempts to drain the hematoma himself, using the same needles he used to inject his steroids, and “filling two glasses with blood and pus” he sought emergency medical treatment. Ultimately his arm was saved, at the cost of a significant reduction in the size and shape of the biceps.

There’s a very interesting interview with Gregg at T-nation here:

The Most Hated Man in Bodybuilding

You can watch the whole “The Man Whose Arms Exploded” here in 5 parts (approx 45 minutes), it’s truly fascinating: