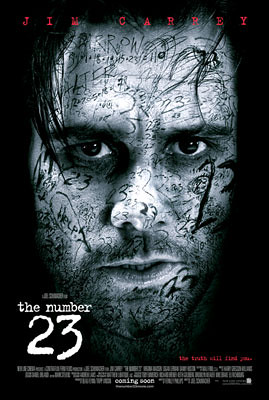 Spiraling into a dark obsession with the number 23, Walter Sparrow twists his once idyllic life into an inferno of psychological torture that could possibly lead to his death as well as the deaths of his loved ones. Spurred on by a mysterious novel, The Number 23, that he doesn’t dare put down, Walter is forced to unlock the secrets of his past before he can continue his future with his wife, Agatha

I went to the cinema last night to catch Wild Hogs, but it was fully booked both last night and for tonight, so no chance there.

The Number 23 with Jim Carrey fitted into the schedule nicely though and there were some decent seats, so 23 it was.

I have never heard of the film, had no idea what it was about, had seen no reviews and went in with no preconceptions, apart from it had Jim Carrey in it…but I actually like his recent movies, and he’s done some great stuff like Truman Show…so I was open.

After getting home I read the movie got pretty much slated by critics and had a pretty low score at both Yahoo! and IMDB…I don’t really understand why.

Perhaps because Carrey was not doing some kind of Pet Detective-Dumb&Dumber-Rubber Faced crap?

I really enjoyed the film, it was spooky, beautifully shot, colour toned, gritty and it really drew you into the story.

Carrey put in a great performance in both roles…as did his wife/girlfriend Virginia Madsen, who has had some pretty bad roles. 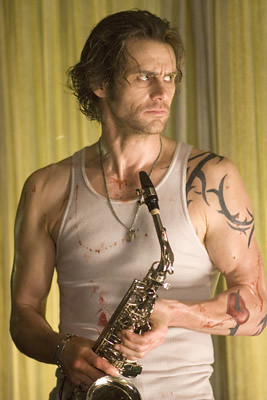 The movie is pretty weird, probably why I enjoyed it so much as I really love weird stuff.

I definitely suggest watching it if you like the darker side of things and ignore the reviews, they are crap.

If they can CAMWHORE….Why can’t I?!
Paradise?