Movie Review – In The Bedroom – Intense 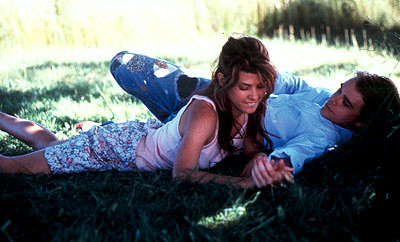 The Fowlers are a normal family in Maine. Matt (Tom Wilkinson) is the town doctor and loves to fish, his wife, Ruth (Sissy Spacek), is the school’s choir leader, and their son, Frank (Nick Stahl), is home from his first year of college. Frank is in love with Natalie (Marisa Tomei), a young mother who isn’t quite divorced yet from her ex-husband, Richard Strout (William Mapothor), whose family runs the local cannery. It’s makes Richard’s blood run cold to see his wife running around with another man.

I’ve been meaning to watch this for a while too, 5 oscar/golden globe nominations in 2001 so it must be good right?

It’s good to watch a film sometimes with no expectations or no idea of the plot, which I did. I expected it to be a decent film, perhaps not to my taste but that was all.

The film is a masterful character study of small town life in America with amazing performances from all the leading characters (wilkinson, spacek, stahl and tomei).

Sissy Spacek puts in a haunting slightly crazy performance as the mother of Stahl, her age showing, perfectly suiting the role she was playing.

Tom Wilkinson showed himself as an amazingly versatile actor once again, having done comedies like Full Monty, proves he can play a dramatic lead man in a serious film.

It’s a fairly slow paced film and pretty long, but somehow, it keeps you riveted to the screen, even though there is nothing ‘going to happen’ it just takes you through an emotional rollercoaster, you share the pain and anguish, the anger, the joy..the realisation.

It’s a fairly bleak movie, but it is very much worth watching, I’d recommend it if you are in the mood.

4 Responses to Movie Review – In The Bedroom – Intense