Movie Review – Wallace & Gromit in The Curse of the Were-Rabbit 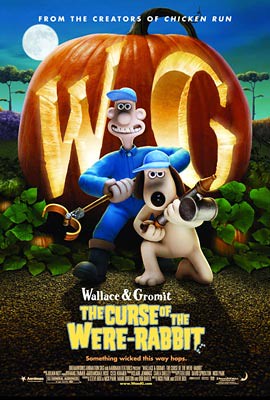 As the annual Giant Vegetable Competition approaches, it’s “veggie-mania” in Wallace & Gromit’s neighborhood. The two enterprising chums have been cashing in with their pest-control outfit, “Anti-Pesto,” which humanely dispatches the rabbits that try to invade the town’s sacred gardens. Suddenly, a huge, mysterious, veg-ravaging “beast” begins attacking the town’s sacred vegetable plots at night.

This is a really great film, I meant to catch it on the cinema but was rather tied up when it came out so I didn’t get chance.

I’ve followed Wallace and his canine buddy since the early days when they sprung up in the UK with their short pieces about the crazy inventor and his dog (around 1993 I think).

The previous shorts were really good too:

This is a full length feature and took an amazing FIVE YEARS to finish. Hand animated with stop-motion techniques and clay models (During the character design phase, the look of Lady Tottington changed as many as 40 times).

It’s an amazing thing to see and shows people can still innovate, the rabbits are cute and the characters show such great expressions to say they are just really lumps of clay. 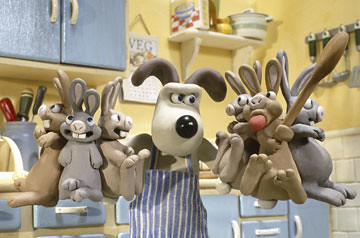 It’s really fun story too, with plenty of things for Adults that will fly over the heads of the kids (Look out for writing, whenever you see a label/some text/something written it’s most likely an adult joke). My favourite was the box with “May contain nuts”.

There is an allstar voice cast, a great storyline, good pace through-out and a lot of laughs.

Definately worth watching, moreso if you like British humour.

You might find the premise of a ‘Were-rabbit’ a little childish, but it’s done very well.

It’s gone straight into the IMDB top 250 at number 250 aswell, that’s quite an acheivement.

Moms Trip – Day 2 – Dinner at De Chiengmai Thai Seafood
Egosurfing, how popular is the online you?