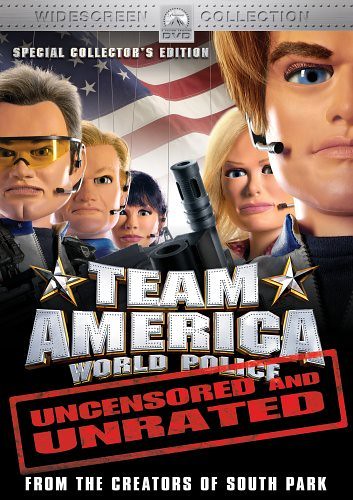 Team America follows an international police force dedicated to maintaining global stability. Learning that power hungry dictator Kim Jong Il (Parker) is out to destroy the world, the team recuits Broadway star Gary Johnston (Parker) to go undercover. With the help of Team America (Stone, Miller, Masasa, Parker, and Norris), Gary manages to slip into an arms dealer’s hideout to uncover the plan to destroy the world. Will Team America be able to save the world?

Mannn, this is without doubt one of the funniest films I’ve ever seen, EVAR. It’s made in a ‘Thunderbirds’ marionette puppet style.

It’s also so quotable, some movies you can just quote endlessly, like Pulp Fiction for example is eminently quotable.

So lick my butt And suck on my balls

It’s just so me aswell, I feel like this about America, and their actions. They don’t care about other countries, they are just there to blow shit up and act tough. They only go to countries where they can gain a tangible benefit and extract something. Or lend them a shitload of money and leech all their natural resources.

This movie is a perfect social commentary on that. Plus is demonstrates Americans ignorance, and well it’s just generally hilarious in all ways.

Especially the puppets humping scene, and the part where the ‘hero’ is puking his guts out, classic man, seriously classic.

I was pleasantly suprised to see it ranking so high on IMDB aswell, as it’s so totally outrageous and offensive, it scored a very good 7.3. 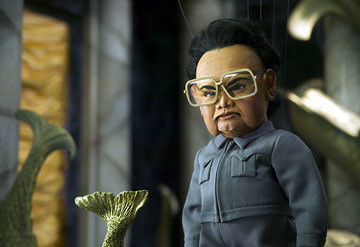 I’m the smartest, most crever
Most physicarry fit
But nobody else seems to rearize it

It’s quite possible the most politically incorrect thing I’ve EVAR seen, and that’s why I love it. It’s totally Trey Parker style, not giving a fuck what anyone thinks and just laying it down.

If you haven’t seen this movie, I recommend you do so ASAP.

For those that have seen it, and love it, the Team America Script..