So I bought an original VCD – Sepet 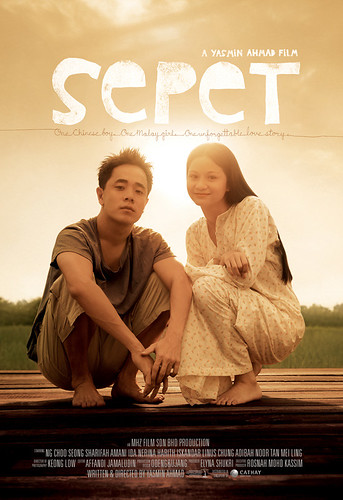 One Chinese boy, one Malay girl, one unforgettable love story

I wanted to see Sepet at the cinema, but I was away so I didn’t have a chance, I wanted to buy the Uncle Ho DVD but there isnt one, and I’m not into buying pirated VCD’s so I bought the original from Jusco on sale for RM15.90, pretty cheap if you ask me.

I’ve been wanting to see it for quite some time though, as to be honest the majority of Malay movies from recent years I’ve seen have been crap, bring back P. Ramlee, and I heard this was pretty good, whacked some boundaries. Even within Sepet they criticised Malay movies.

It breaks some stereotypes and enforces some others, like a chinese Ah beng[/url] VCD seller, writing and reading classical poetry? That’s a new one…and his best friend who plays the piano?

The story is good, very sweet and and bit sickly in places, the direction is good, the acting is ok on the whole, the main characters are good anyway. It’s pretty realistic and potrays Malaysian life with an almost gritty reality.

The cinematography suffers a little tho, it’s quite marked they are only using one camera, and it makes some of the shots a bit weak.

I think it would be excellent for people outside Malaysia to see this movie as a taste of the culture here, they might not realise what it’s like.

I don’t quite like the ending, but other than that’s it’s a nice story, on the whole well told, with some interesting characters typifying Malaysia.

Ida Nerina and Harith Iskandar were great as a Husband and Wife truly in love, passion in their eyes dancing around in sarongs, great stuff.

All in all it’s a cute indy movie, it’ll never be a blockbuster or a chart topper, but I don’t think that was the focus, it’s not a big budget movie, it’s a movie about people, relationships and opening those ‘sepet’ (small eyes).

I’d give it a 7/10 and say that well, it’s definately worth watching, one of the best local movies I’ve seen for some time. I still need to watch Puteri Gunung Ledang though.

Being Civic Minded and Caring for your Environment and Society
My Car Was Vandalised Today.

35 Responses to So I bought an original VCD – Sepet