I-Robot – OMG THEY ARE TAKING OVER 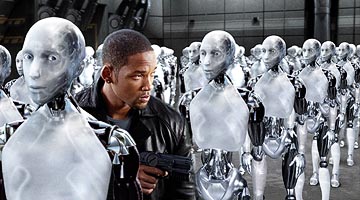 Set in a future Earth (2035 A.D.) where robots are common assistants and workers for their human owners, this is the story of “robotophobic” Chicago Police Detective Del Spooner’s (Smith) investigation into the murder of Dr. Alfred Lanning (James Cromwell), who works at U.S. Robotics, in which a robot, Sonny (Tudyk), appears to be implicated, even though that would mean the robot had violated the Three Laws of Robotics, which is apparently impossible. It seems impossible because.. if robots can break those laws, there’s nothing to stop them from taking over the world, as humans have grown to become completely dependent upon their robots. Or maybe… they already have? Aiding Spooner in his investigation is a psychologist, Dr. Susan Calvin (Moynahan), who specializes in the psyches of robots.

I’ve been meaning to watch this movie for a long time, I missed the cinema release as I was away in some mud-hut somewhere, so I picked up the DVD which I just managed to watch last night.

The movie is kind of based of Isaac Asimov’s 3 laws of robotics:

2. A robot must obey orders given it by human beings except where such orders would conflict with the First Law.

3. A robot must protect its own existence as long as such protection does not conflict with the First or Second Law.

The movie evolved around this, what makes humans what they are, and what divides robots?

What happens if robots evolve and decide these laws aren’t the best thing for humans? It’s kinda matrix-esque in theme but not so extreme.

Will Smith was good as the ‘hero’, I’ve always liked him though ever since the Fresh Prince of Bel-Air days (Man I loved that series big time!).

The special effects were nice, especially Sonny, the ‘unique’ robot, the action scenes were pretty good and a decent story with a decent twist.

The screenplay for this movie was actually written in 1978, a joint effort of Isaac Asimov and Harlan Ellison.

Definately worth watching, whichever way I look at it.

My England Berri Powderful – Is yours?
Deception Point – Dan Brown

11 Responses to I-Robot – OMG THEY ARE TAKING OVER