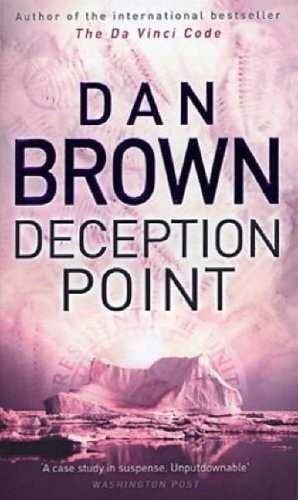 “Deception Point” opens in Washington, DC, during a tight Presidential campaign. The incumbent, a man of strong principles, is a major NASA supporter. His opponent, who is basing his campaign on turning NASA into a private, non-governmental agency, thus saving the US taxpayer billions of dollars annually, is way up in the polls. He is also accepting enormous illegal campaign contributions from private aerospace companies who have billions to gain from the privatization of NASA. After many failures & much spending, NASA is badly in need of a success.

Catching the LRT does have it’s advantages, time to read every day, which is nice for a change 🙂

This is, again, a very well written book, suspenseful, twisting, turning, full of political intrigue, trickery games and as in the title, deception..

As the synopsis above says, it’s mainly about NASA and 2 other main parties, the president of the United States and his people and a power hungry Senator fighting for the Presedential slot..

Both are playing games that are out of their league.

The characters are very well developed, the lead being a female similar to those in his other books, sexy and smart, Rachel Sexton this time, daughter of the senator fighting for the presidents room..By the end you feel like you know them, as you should, you feel emotion, puzzlement, betrayal and intrigue..

Dan Brown seems to have mastered the art of writing screenplay style books, flawless dialogue and action scenes which you can easily translate in your head into real live motion, this makes his books very accessible and you never find yourself struggling with obscure words or weird ‘poetic’ similies. He’s intelligent but doesn’t try and baffle you with nonsense, he researches every topic he writes about very thoroughly, if you are an expert in the field he is talking about, of course there will be differences, it’s a work of fiction after all, but for the majority it’s convincing enough.

He deals with the dark arts of religion, politics and science with a perfect balance, now that in itself is a hard feat (DaVinci Code got the religion, Digital Fortress mostly science, Deception point Politics and Science).

This is a good book no doubt, I thoroughly enjoyed it and at points I couldnt put it down, kinda dangerous when you’re driving on the highway (just kidding :P)..

If you haven’t read it, do it!

If you haven’t read it, and you know me, ask me and I’ll lend it to you.