The Jakarta Trip – With Pictures!

So here are my observations and pictures from Jakarta..

Am back in the land of the civilised now…

So Sunday night I got home late and packed my things before crashing out.. 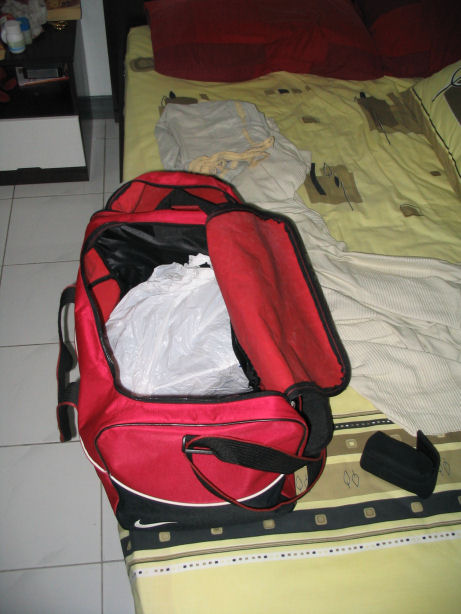 As I mentioned the airport was very ‘rural’…and empty 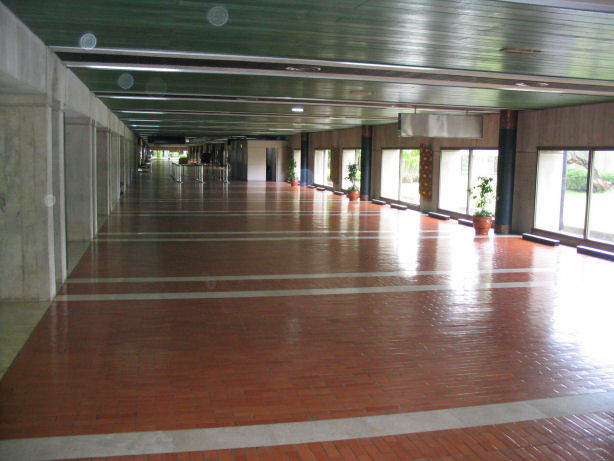 I arrived at the hotel, a modest affair, the Arcadia[/url] (under Ibis[/url]) 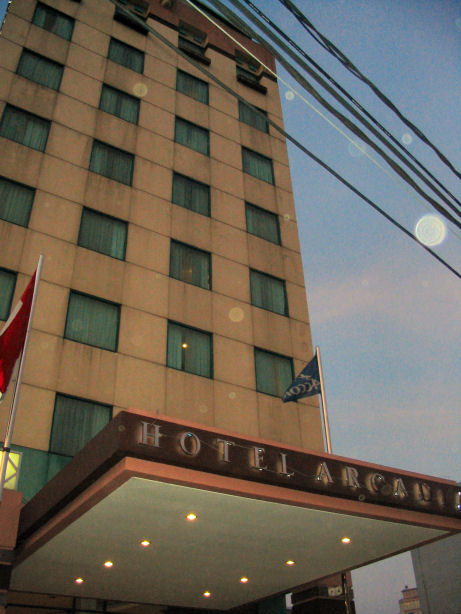 The room was normal 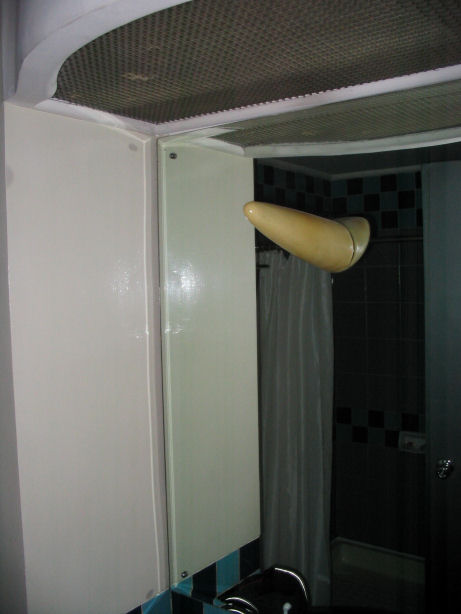 Another interesting thing I noticed was the ashtrays were full of Coffee Beans! 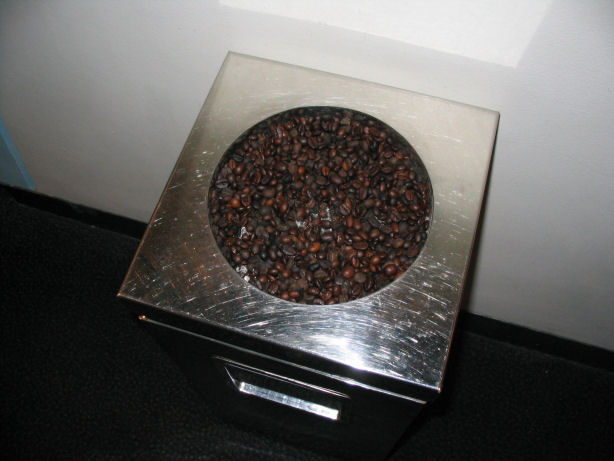 I did notice something weird though, all the lifts here stink of some kind of overpowering air freshener, it reminded me of the librarian back in highschool who used to overpower everyone with the smell of lavender oil..

In some of the lifts is was almost too pungent for me to handle, I felt faint..I mean people there don’t smell THAT bad, what’s it all about? If anyone knows, please enlighten me.

I caught a good view and Sunrise from the hotel when I got up at 5am by mistake.. 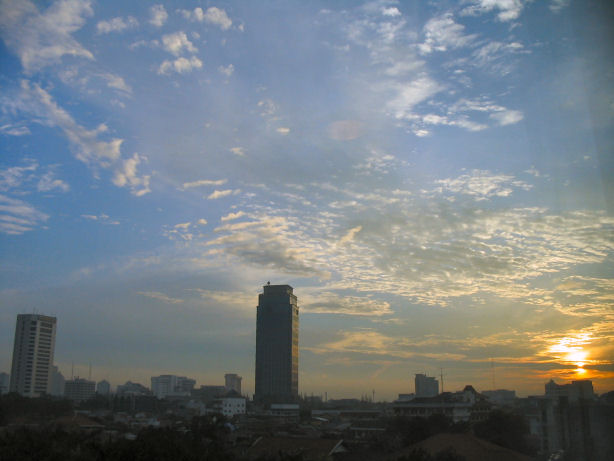 I tried the local Root Beer.. 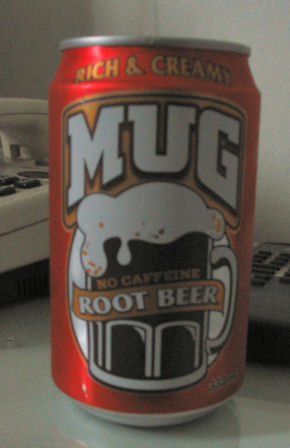 It looks very similar to the one here (Frost), but it’s not as good!

Anyway A&W with ice cream is still best in a glass mug…the A&W in a can is vile.

So the next evening as I mentioned I wondered out to get some food..as you can see something like Bangkok, or Chinatown in KL. 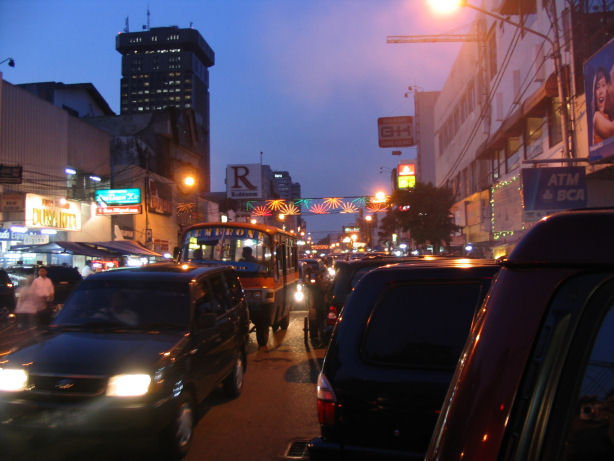 A couple of people mentioned Bakso, so I looked for Super Bakso, instead I found Raja Bakso (King)…giant beef balls in a nice oniony clear soup, usually served with rice noodles (bihun/vermicelli). 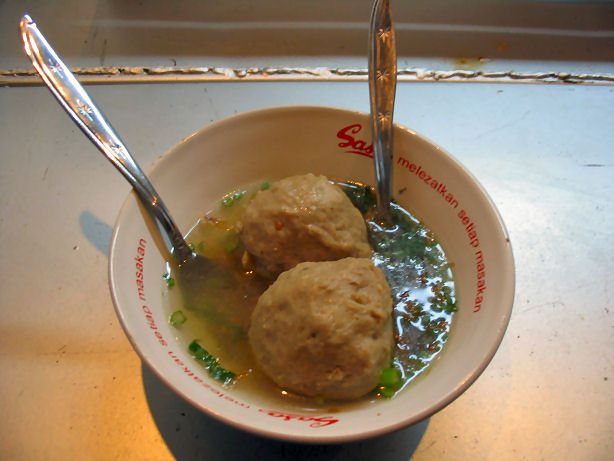 Along with that I had the famous Teh Botol.. 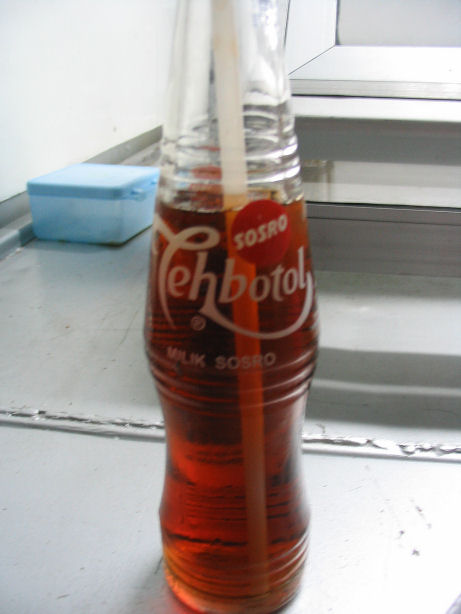 On my way out I got cornered by a tour-guide who went on and on and on and proudly demonstrated his cockney accent, yeah nice one fella..

After that I had to try some Satay, as you do in Indonesia, it was everywhere, so I sat down at a roadside stall with a good view for people watching, must check out the local scenery you know 😀 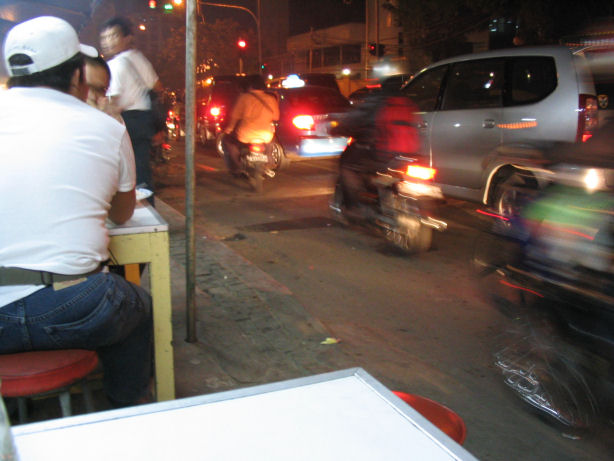 The only thing was, it felt like smoking was more healthy than breathing normally, what with the charcoal smoke from the stay grill and the fumes from the cars, bikes and bajajs, it was pretty putrid.

The satay was GOOD though, I had lamb and chicken and teh botol ais.. 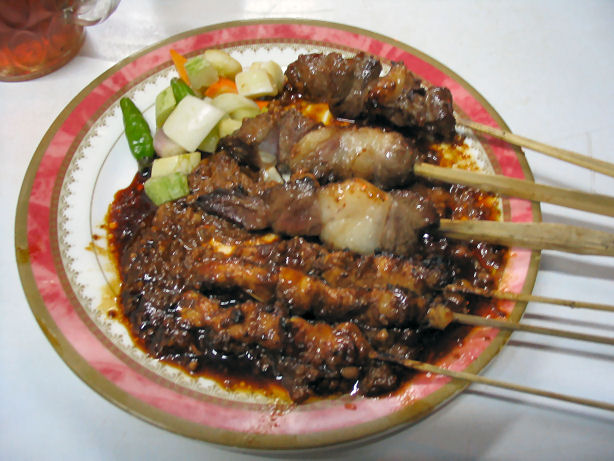 Lamb was quite a bit more expensive than chicken…there was also a small chilli on the plate, I can take spicy food, so I thought looks ok, I proceeded to eat it, following that I proceeded to piss from the nose and cry for a while, it was good! No really it felt like there was a large hole burning through my cheek..

My colleague was again surprised at how I managed to get everything at bottom local prices, not inflated at all..

Here you can see a trio of Bajaj’s in action.. 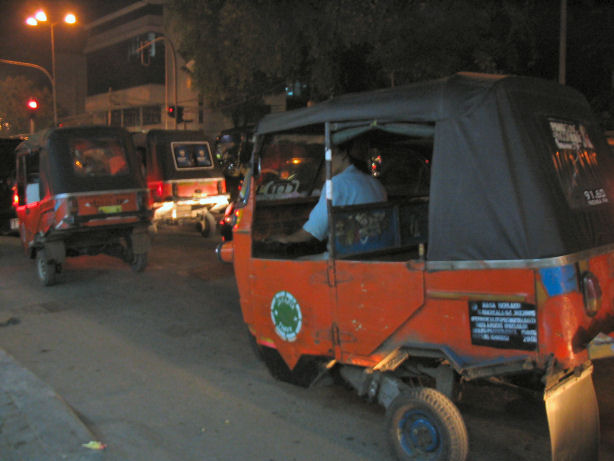 Another thing I noticed is here is the predominance of Dunkin Donuts, I mean there are a few here in KL, but all within the confines of shopping centres, in Jakarta they were everywhere, on virtually every street corner, every 2-3 blocks you pass, you’ll see a Dunkin Donuts, weird..

As most people know the traffic in Jakarta is horrible, you tend to see stuff like people pushing small carts piled up with 40 used rubber tyres on them (quite a site), people walking down the middle of the street selling newspapers and magazines, people walking from car to car playing whistles or banjos, when you eat you’ll be plagued by people selling books, small children with some kinds of certificate asking for money and shoe shine boys..

People really do mostly smoke Kretek aswell, apart from those happening chicks, their ciggy of choice seems to be Marloboro Menthol.

Went to one of the high class shopping malls to pick up some snacks and bumped into a load of models just leaving a show, sorry was too stunned to take any pics (Yeah tall with boobs and good looks, hmm).

We headed off to Hard Rock Cafe to have a beer, they had a live band on who were really good (Phillipinos, no surprise there), and had some beers, a jumbo platter, and some more beers 🙂 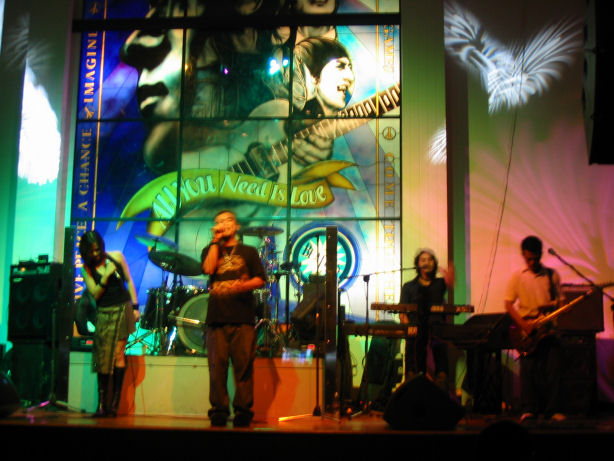 Yeah the female singer was hot!

Another habit of Indonesians, is more extreme than Malaysian parking, it’s very common for them to double park there, blocking other cars in…

But everyone parks with their handbrake off…so you quite often see groups of people pushing cars here and there so they can exit..interesting eh.

After that I went for a tour around, checked out the national monument, national museum, china town (and the red light district) and a few other places, even saw the local police buying pirated DVD’s at one of the stalls 🙂 Indonesia apparently has the highest corruption index for Asia (and perhaps in the world?). You pay/tip for everything here, my colleague said if the beggars are very insistent you have to give them something or they might scratch your car..

Went down Jalan Jaksa aswell, backpackers haven, loads roach-ridden hotels and cheap bars with the white dudes hooking up with LBFMs (Little Brown Fuck Machines). There was a whole bunch of dodgy Nigerians selling coke aswell, not a place to go if you aren’t street smart..

Also not such a great place to go with the current political climate as the extremists and fundementalists know Jalan Jaksa is where they can find all the aussies and yanks..

After that headed off for some more food, I was still stuffed, but well gotta try everything..

Another road-side stall, but at least this one wasn’t like sitting in an exhaust pipe. 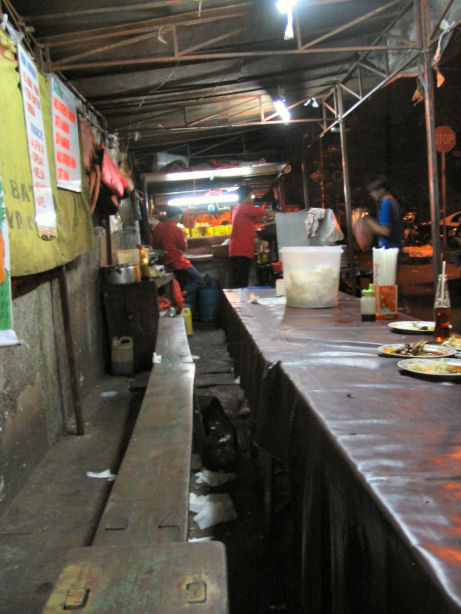 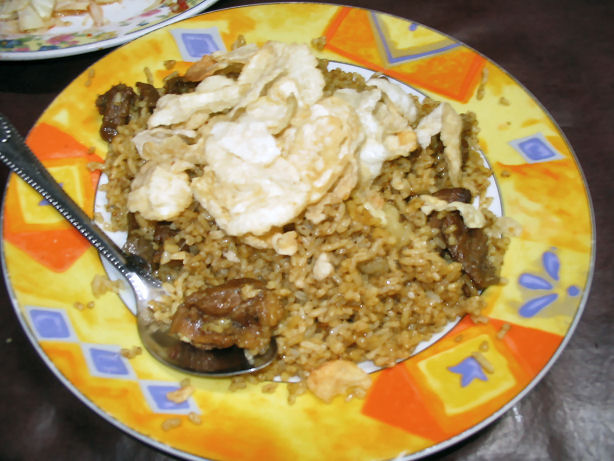 With a nice plate of condiments.. 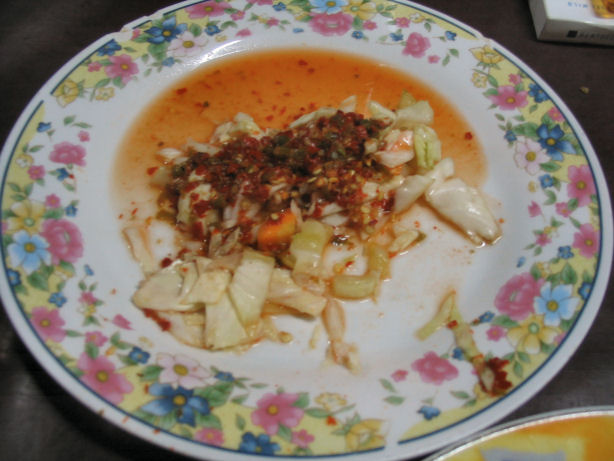 So the next day I took class then headed back, grabbed a taxi and endured the infamous Jakarta traffic, huge wide roads, but traffic chaos…there are loads of roads that split into 2 seperated lanes (like going the wrong way up a dual carriageway), round-a-bouts which you can round either way? Man it’s confusing.. 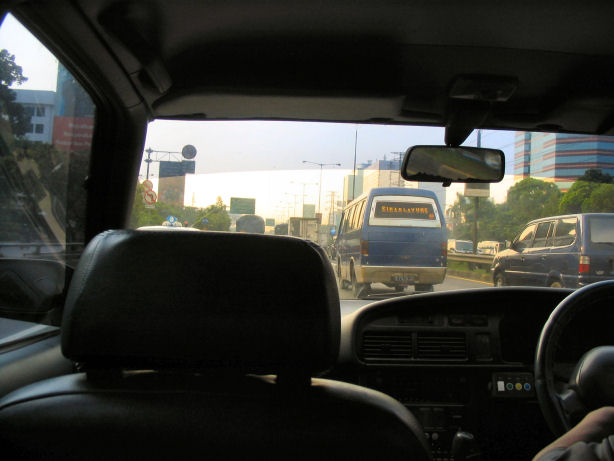 I bought a load of indo snacks back for my homeys including nice stuff like chicken intestines 😀 Hope they enjoy them.. 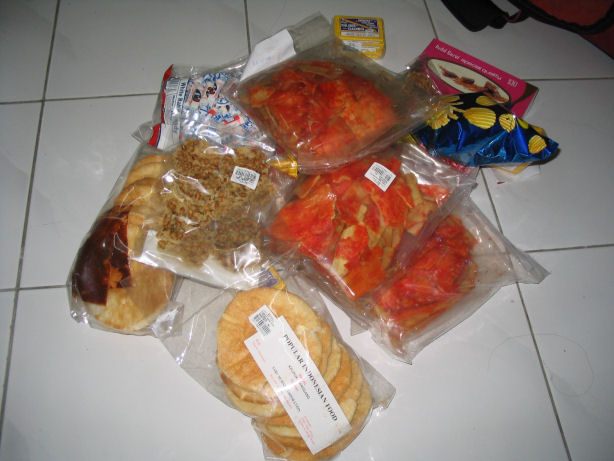 I would like to spend a few days here on holiday some time checking out the scenes, pretty cheap now with Air Asia. Of course I’d like to venture outside Jakarta and check out the rest of the country, supposed to be a beautiful place.

I did notice a language difference aswell, even though I’m quite ok with Bahasa Melayu, I had real trouble understanding them…the accent is quite different due to the Dutch rather than English influence, some basic words like Orange are totally different (Oren in Malay, Jeruk in Indonesian).

That’s about it..I’ve added the Photo Gallery for the trip just now.

BTW Free booze tonight at Espanda (used to be Emporium), might see you there.

Don’t forget THE PARTY OF THE YEAR, tommorow night in SS3.

Enjoy the weekend, I will.

7 Responses to The Jakarta Trip – With Pictures!