The weekend, the curtain rail and sweat!

Well Friday I had a rotten gut, so I didn’t make it to work, gave me an opportunity to get my snapped anti-roll bar fixed though.

There was a horrible knocking noise, and I had a look under the wheel arch to see a piece of metal dangling there, which wasn’t good, mentioned here..

I sent the car in Friday, but the part my mechanic had didn’t fit so he had to keep the car ’til Saturday, so I got him to service it too and change the oil. He fixed the back brake-light bulb aswell, but somehow managed to stop the main 2 brake lights working…have to have a word with him about that.

Friday I managed to get fix the holes in the wall and remount the ciplak curtain rail, so it’s back up now and the world and his brother can no longer stare into my living room. I didn’t hang the super heavy curtain again as I feared the curtain rail couldn’t take it, the concrete in the wall prevented me from drilling as deeply as I would like, and I don’t have a super pneumatic drill to kick it’s ass.

But the net is back up, so place is looking pretty cool after I hung up the xmas lights my mom sent me and tidied the place up. 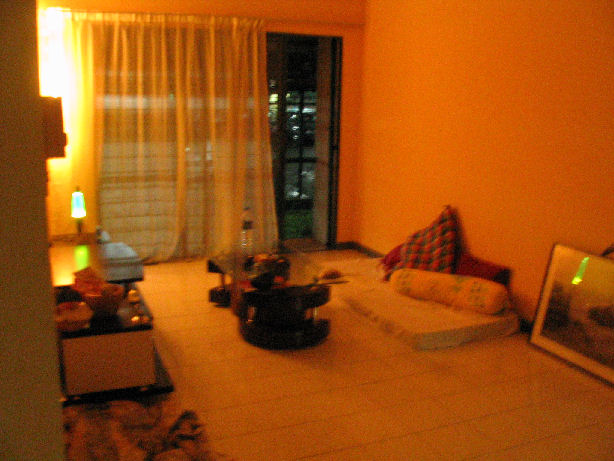 Pic is a bit grainy as it was taken with a long exposure, rather than flash as flash doesn’t look so good.

Went to try and pay my summons too, but the computer was offline and the guy said try PJ State police station, but I had no freaking idea how to get there so I’ll go back to Eneos in 1U this week some time.

Did some other boring crap like paid my 20 bucks worth of electric and water bills (hey I haven’t been there for a month, I’m suprised I managed to use so much)..

I managed to get my much sought after jacjac cushion aswell, rock on! 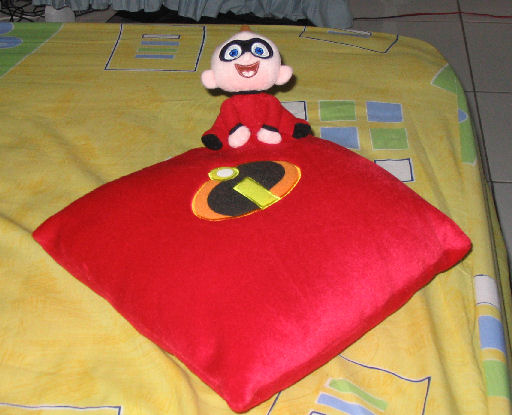 Saturday night heaved my TV and DVD cinema thing across, sweaty old business that was.

Had to run out and have a beer immediately after, with some not bad Wah tan hor (Cantonese fried noodles).

Sunday slept till late, went for some Banana leaf rice (it’s definately better early in the day), watched a movie for a while and then went to Breakers in Hartamas to watch the National Foosball Competition finals (Single, Doubles and Mixed Doubles). Some pretty awesome players there, I can’t play for crap, I’ve only played twice I think. The faggots are pretty good though, and had some other friends there.

Had a couple of jugs of beer and the company of some pretty hot beer girls, so all was good, went to Misai for a while after and crashed..

Telephone line should be in by the end of this week, might be able to post at the weekend too 🙂

Oh yeah, I’m sure you all want to see my reindeer too, here is it: 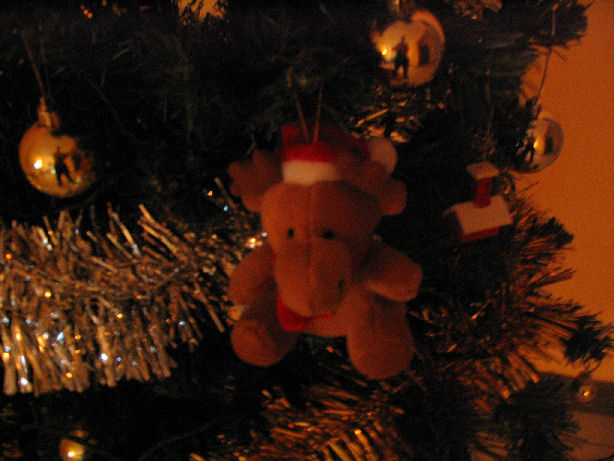 10 Responses to The weekend, the curtain rail and sweat!