I’m not one of those people that likes to get a device and then review it within a few days, I don’t really think that’s fair and I don’t think that gives a good balanced consideration to whoever is reading the review.

Until you really use something, in the case of a phone, use it every day for an extended period (at least 1-2 firmware updates) there’s no way you can truly know the pros, cons and intricacies (aka oddities) that come with the device.

As for me I was using a Nokia N97 for a fairly long time, it was actually about a year ago when I got it (July 2009). When I first got the N97 I was rather impressed, it was a slick device with solid build quality and a very capable camera for a phone. But after a while I started realizing Symbian was quite terrible, the phone CPU and memory were underspec and well it really wasn’t cutting it for a flagship device.

With Nokia most ‘N’ series devices seem to come with rather flaky firmware when they are first released, and sadly it takes about a year for them to get stable. By the time the N97 was stable, it was a pretty good device, some of the memory issues had been solved and it was usable..but well by then it was old and I wanted something else (The N900!!). 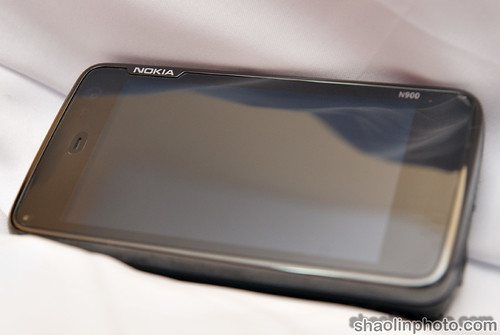 I’d actually wanted the N900 since it was rumoured that Nokia was coming out with something on the Maemo platform.

I actually only sold the N97 last month (because I kinda forgot about it) and I’ve had the N900 since it launched – 5 days after my birthday on March 26th. So I’ve had it for a few months now and have been using it as my only phone. Anyway that’s enough jibber-jabber, let’s get down with the devices.

I’m not gonna recite the specs or anything like that, because well you can Google for those so that’s just a waste of bandwidth. I’m gonna write about my experience with the phone and honestly, what I think about it.

The N900 is a chunky device (181grams), which is fine by me as I accept phones that have a full slide-out QWERTY keyboard are going to be rather thick. And well it’s only slightly thicker (18mm vs 15.9mm) and heavier (181grams vs 150grams) than the Nokia N97. So I was already used to a device with that kind of heft.

As you can see in terms of form factor they are almost identical (N900 in front, N97 behind). 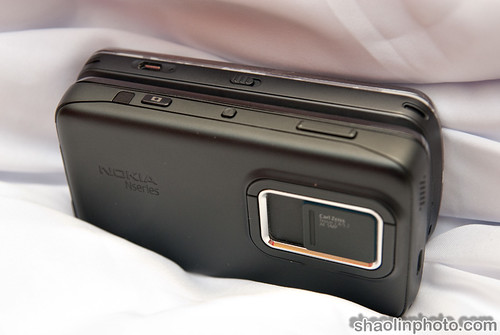 Ergonomically speaking, I still prefer the tilt the N97 screen has over the completely flat N900 – but then the N900 is more like a tablet with a slide out keyboard. The N97 was a purebred ‘smartphone’ and the N900 is basically an Internet tablet with a phone application. 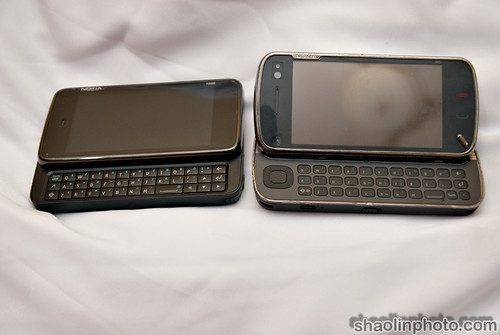 Hardware wise the camera unit of the N900 is much more sanely designed, I just hope they work out some way to factor back in xenon flash capability so we can rock awesome night time pictures like the N82!

The camera is decent enough in well-lit situations, but don’t expect miracles in the dark. This was taken and posted directly to Flickr from the phone. If you want more samples just check out my Twitpic stream, all pics from March 26th onwards were taken with the N900. 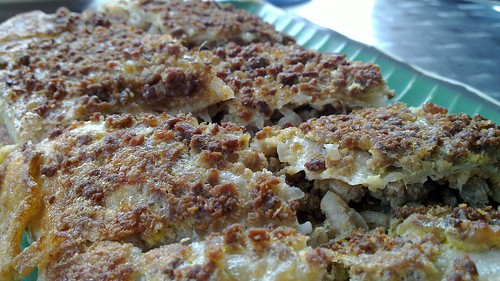 Hardware wise – I love the N900, it’s well built, solid, heavy and has nothing much on it to break. It has enough physical buttons (power, volume, camera and screen-lock slider). The ‘phone’ part has no buttons at all, there’s no green and red or home button – it’s all touch baby.

Functionality wise the N900 is light years ahead of the N97 and Maemo being a Linux based platform is so far ahead of Symbian it’s not even funny. For someone familiar with using Linux it’s simply superb. Multiple desktops, fully customisable, widgets, contacts, whatever you like. I mean look at the amount of stuff I have going on with this single desktop screenshot. 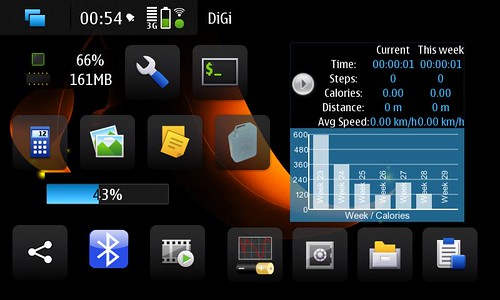 I am actually only using 3, 1 for Internet stuff (bookmarks, email, web browsing and twitter), 1 for contacts (phone, calendar, address book and conversations) and 1 for system/other stuff. I think I’ll save all about the apps for another post as that’ll just be too much here.

The most amazing thing is it just doesn’t slow down, true multi-tasking at full speed and it has a plethora of applications. Yah most are a bit geeky and a lot deal with data, but for me I love those kind of things. 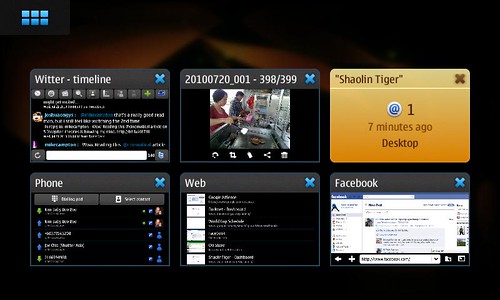 Right there I have Witter the Twitter client running, image browser, e-mail notification (yes it’s pushmail with Nokia Messaging), phone, web bookmarks and Facebook (full NOT mobile version) and it doesn’t even break a sweat.

It has some mind-blowing games too, but well it’s not really a gaming machine. Angry Birds is kinda fun but I mostly play backgammon, because I’m a geek like that.

You can fully customise the phone, and I mean fully. You can even install Android on it if you dare, or the upcoming Meego has an Alpha which people have hacked to work on the N900. It’s not really functional, but it personifies well what this phone is – an ubergeek device. It’s not a consumer device and it never pretended to be, it was initially just a device for Maemo developers but there was such a demand for it Nokia released it to the public.

Conversations is something like the Blackberry style integrated messaging, it has ALL kinds of support built in (MSN, Google Talk, Skype, AIM, Yahoo!) and it works very well although the integration and multiple sign-ins could be smoothed out a lot. It’s all threaded of course, and the geeky part? You can customise the whole conversations look and feel via a CSS style sheet 0_0 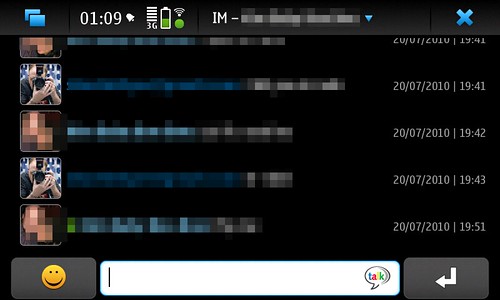 Contacts themselves can store an immense amount of information and it can all be linked up (Facebook, MSN, Gmail, Twitter, Webpage, E-mail and so on). It will show you live status of that person if they are online/busy etc in the address book and on your home screen using the contact favourites. Plus you can actually make voice calls using Google Talk which is awesome!

It’s has a lot of great features, most of which are not yet polished but I’m glad to see something interesting and new from Nokia and I hope this is the direction they keep pushing.

The N900 is a great device, but most certainly not for everyone. It’s really a geek device for people who want to get stuck into weird apps and dig around in the OS itself. If you just want a phone that does normal stuff, stay away from the N900.

If you want a pocket computer that runs on a Linux platform that also has mediocre phone capabilities – the N900 is king! I’m not into the whole Walled Garden thing, why should I need to ‘jailbreak’ my phone to run apps on it? Isn’t the phone mine? Didn’t I pay for it? Didn’t I buy it so I could use it as I please? Obviously not the case for some devices.

For me the future is in open systems, platforms like Android and Meego are the way forwards. Right now though I have no desire to change phone, I have no interest in the upcoming N8 and I wait to see what comes out from Nokia with their new strategy and direction on the Meego platform. Of course the pre-requisite for me is a slide out QWERTY keyboard 🙂

I could probably write another 3000 words about this phone and all the things it can do, but honestly who would want to read that? As for the N97, there’s only two things I really miss about it – Garmin Mobile XT and Gravity (the best mobile Twitter client in the World EVAR).

All in all, I really like it and that’s the end of that!

If you own an N900 there’s some handy tips and tricks here and here.