My Dog can beat up YOUR Dog – and a Ripped Cow

People mistake her for a pitbull with a pinhead, but Wendy the whippet is one rare breed.

So rare that the Central Saanich dog recently graced the New York Times. She also had several of her photos shown on The Today Show, all because of a rare genetic mutation that has led to her being the Incredible Hulk of dogs.

Wendy is a 27-kilogram rippling mass of muscle. Forget the so-called six-pack stomach: Wendy has a 24-pack. And the muscles around her neck are so thick, they look like a lion’s ruff. 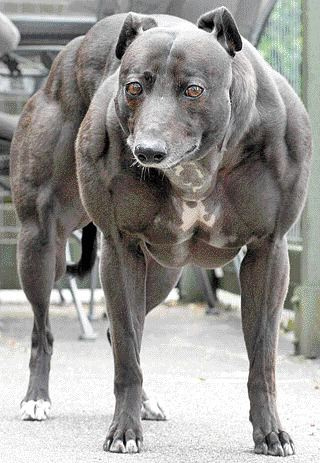 You can read about Big Wendy here.

Interestingly, whippets with the homozygous deletion also had an unusual body shape, with a broader head, pronounced overbite, and shorter legs. These whippets have also been called “bully whippets” by the breeding community due to their size, but not their temperament.

Apparently it’s a genetic mutation (Myostatin) and this is known as a bully whippet – you can read more on Wiki here.

And then check out this stacked cow.

It’s so wrong for a cow to be muscular.

Kharu – The Latino Rose & The Golden Goddess
Why ShaolinTiger – What’s in a Name?