The Evolution of Language, or is that Devolution?

Following the recent debates in the Summons post[/url] (Woo 59 comments), I was thinking about language and semantics, there are always debates about what is a word or not, the correct usage and so on. This is due to the fact even language itself it’s partially subjective. There is room for adding your own personality to the way you write or speak.

But how can one person say it’s right or wrong, I am fond of a saying (as is KY), if the other person can understand your meaning, what you are trying to convey, then it’s correct. This is the purpose of language no? To convey information or feelings or something at least to another being.

Much like computer programming, computers also have languages so when you transfer these procedures between machines they are still understood by the interpreter (C++, Java, Delphi etc.). There are ‘proper’ ways to write code and not so proper ways, but if the program works and doesn’t crash it’s good no?

The same goes for the spoken word, we all speak differently, we all interpret things differently, this is what gives us character and personality and stops the world from being a place full of replication and let’s face it, it would be boring.

An example would be this (a pretty extreme example):

I cdnuolt blveiee taht I cluod aulaclty uesdnatnrd waht I was rdgnieg The phaonmneal pweor of the hmuan mind. Aoccdrnig to a rscheearch at Cmabrigde Uinervtisy, it deosn’t mttaer in waht oredr the ltteers in a wrod are, the olny iprmoatnt tihng is taht the frist and lsat ltteer be in the rghit pclae. The rset can be a taotl mses and you can sitll raed it wouthit a porbelm. Tihs is bcuseae the huamn mnid deos not raed ervey lteter by istlef, but the wrod as a wlohe. Amzanig huh? yaeh and I awlyas thought slpeling was ipmorantt.

If you look at it, it’s a complete mess, but if you try and read it, it’s not actually that difficult.

Anyway back to the original point, sometimes I use words that totally don’t exist, I just made up on the spot, generally extensions of existing words…and people understand the, so surely that’s ok? It’s correct usage of language as it’s intended, to convey a message.

Language evolves, that’s what at does. With each language, there are many dialects, these are proofs of the evolution, there are colloquialisms, localised versions and many other weird and wonderful variations. For example even in the UK, get a Geordie talking to a Londoner and they will have trouble talking to each other, even though they both speak ‘English’.

One of the most famous recent example would the term Google, it has seemingly replaced the phrase ‘Search the Web’. Now the majority of people simply say ‘Google it’.

This is reinforced with such images:

And sites such as https://www.justfuckinggoogleit.com/ [/url]

As can be seen from the Oxford English Dictionary many new words are considered for addition to the dictionary, thus defining them in many peoples eyes as truly real words.

The list of recent editions can be found HERE at AskOxford.com.

bumsters
pl. n. trousers that are cut very low on the hips.

cybercrime
n. criminal activities carried out by means of computers or the Internet.

designer baby
n. a baby whose genetic make-up has been selected in order to eradicate a particular defect, or to ensure that a particular gene is present.

As you’ll notice most of these terms are already accepted in informal language usage, everyone understands their meanings, when this happens language has evolved and when they are inserted into the OED, this truly means they have become part of the English language. Most languages are Creoles anyway, meaning they are mixtures of other languages. A brief history of the English language can be found HERE.

There are also words I believe should not be uttered, for me they are mostly MBA graduate, pseudo-marketing bullshit words that don’t really mean anything like SYNERGY and CHANNEL..fuck off please.

Highlights for me are:

ENEMY COMBATANT — “Makes no sense. Do we have friendly combatants? Neutral combatants? Or how about enemy bystanders? If they are your enemy, just say so.” — Bill Sellers, Hampton, Va.

‘IZZLE’ — SPEAK — By far, the abomination that received the most nominations. Some sort of ‘Rap-Latin’ suffix, as in fa’shizzle, which means ‘for sure.’ “It was clever for about five minutes, or should I say five ‘minizzles?’” — R. Glover, Waterford, Mich.

ALL NEW — referring to television shows… “Of course it’s all new. Why can’t they just say ‘new’? There are no partially-new episodes, no repeat of last Tuesday’s episode with a slightly reworked Act 2.” — Greg Ellis, Bellevue, Wash.

You can submit your nominations for 2006 HERE.

There are also some notable example of devolution of language, such as the great George Dumbya Bush. His saying of dumb things has been so prolific they are acutally known as Bushisms.

There is a good collection here https://supak.com/bush.htm 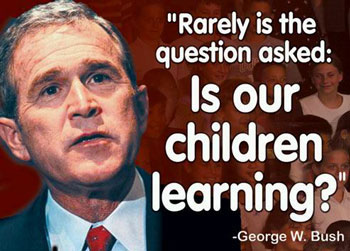 Google for the term Miserable Failure and see where you end up..

Anyway back to the point, language is language, if you understand what I’m saying it’s all good. Pedants are everywhere.

What are your thoughts on this?

8 Responses to The Evolution of Language, or is that Devolution?