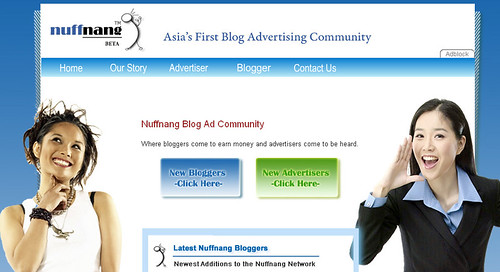 What’s it all about?

Ok so you may have heard of this thing called Nuffnang, or you may have seen the banners on my blog, or on other Malaysian blogs.

Most likely you’ve already signed up and perhaps you too are displaying the ads on your sites, if not…Nuffnang is a new advertising network aimed at blogs.

You can read more about it here:

The target is initially blogs in Malaysia, so if you have a blog, do sign up (you just need 20 or more unique hits per day).

There’s no affiliate type scheme on Nuffnang, I just want to support the local guys and think it’s really great someone has the balls, insight and technical know how to try and do something like this locally.

On a global platform it might not be cutting edge, but for Asia, it’s definitely a step in the right direction.

I also want to support them as their featured blogger (at the moment) looks very handsome and intelligent.

If you’re a blog reader you’ll probably be familiar with Leng Mou and Boss Stewie, one of the guys behind it. He’s a partner in Nuffnang, so show your support!

BTW when I said no to ads on blogs, I said no to irrelevant ‘contextual‘ ads that have nothing to do with the readers of the blog. I fully support a localised, targeted blog advertising network as I believe people with good blogs should earn money for their efforts.

Yah but what the hell does Nuffnang mean?

Some people have assumed it means nothing, but they obviously can’t use Google..as if you break the two syllables up it’s not that hard to find the meaning.

There’s a new dialect emerging in London called Jafaican or Jafaikan, which is a combination of Jamaican and African and possible Fake (as a lot of white kids use it too).

If you are familiar with Ali-G it’s something similar to the patwa he uses, the point is Nuffnang is something different and a different way of communicating with people.

You can read more at Wikipedia or an article in The Guardian.

I really like the fact they have dared to use a different non-generic name (one that doesn’t contain the word ‘ads’ for example) as it shows some creativity and they have forged a powerful brand for themselves.

Anyway I hope you support Nuffnang and local ads and the local guys doing something different sign up ASAP!