Dubai Desert Safari – A must do!

Ah finally back from Dubai, my sleeping pattern is a bit screwed though because of the 4 hour time difference and the 7 hour overnight flight..

It’ll get back to normal soon enough I guess..

Well yes, finally I’m back! Dubai was…hot and sandy and it makes me fat as you can order everything under the sun there without moving your ass off the sofa…Pizza, fried chicken, chinese food, arabic food, indian food, iranian food, lebanese food, groceries..basically whatever you want. And the portions are all huge!

We managed to grab a couple of days off towards the end and relax, we planned our trip out and went for a Dubai Desert Safari the day before we came back.

I recommend the Desert Safari to everyone, it’s an amazing experience, if you are ever flying with Emirates, just stop over in Dubai for a couple of days, check out Jumeirah, perhaps the Mall of Emirates and do the Desert Safari, that’s enough 🙂

The Desert Safari includes sand duning (driving fast up and down sand dunes in a massive jeep which feels like it’s about to turn over!), a camel ride, belly dancing and a bbq in the middle of the desert, oh yah and some shishas!

It costs between Dhs 150 and 280 depending which company you go with (that’s equivalent to the same amount in RM as the exchange rate is 0.99 = 1) and is worth every cent!

You leave for the safari about 3-4pm as it’s too hot before that, and it’s a good time to head out and catch the sunset on the dunes. 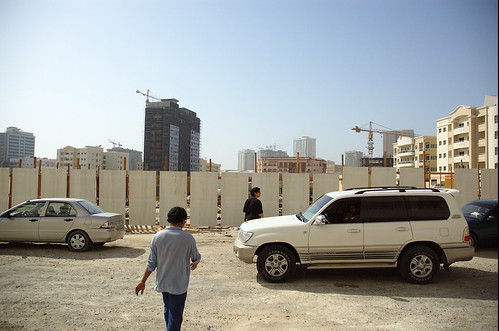 After quite a long journey and a quick stop at a buggy place (you can take a buggy on the dunes for Dhs100 for about 20 minutes and get sunburnt for free), which none of us took up, we hit the dunes.

The driving is crazy, it’s fun, it’s like a rollercoaster, up and down, sliding sideways down sandunes in a heavy 4.5 litre Toyota Landcruiser GXR.

You stop off a couple of times to admire the view and take some pictures of the dunes, it’s a beautiful peaceful place and is suprisingly windy. 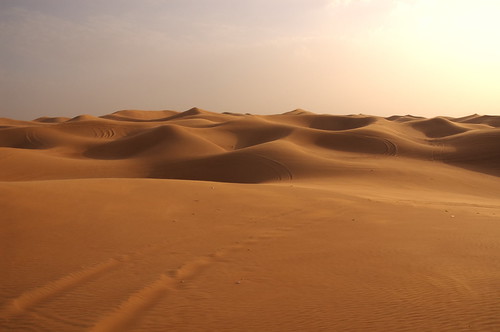 It wasn’t too hot as it was about 4.30pm by then. There are quite a few jeeps up there and loads of people with their own buggies racing up and down the dunes, what fun!

There are dunes in every direction as far as you can see. 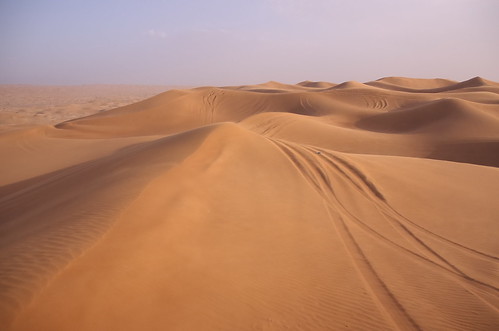 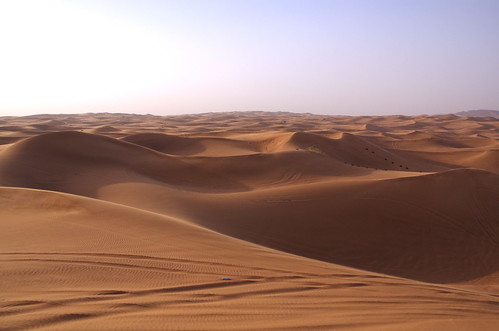 Our trusty vehicle, they deflate the tyres quite a bit before hitting the dunes so they can get more grip. 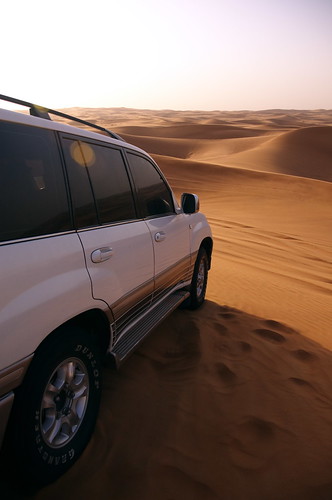 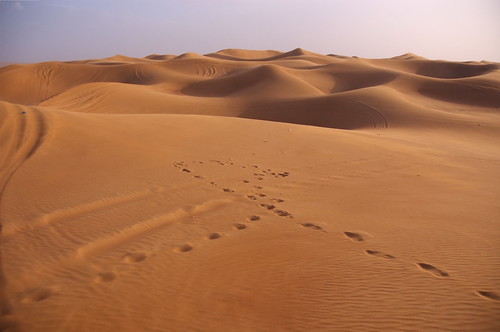 We stopped at a small camp to take some pictures of the camels on the way, we didn’t get to rid one until later though. 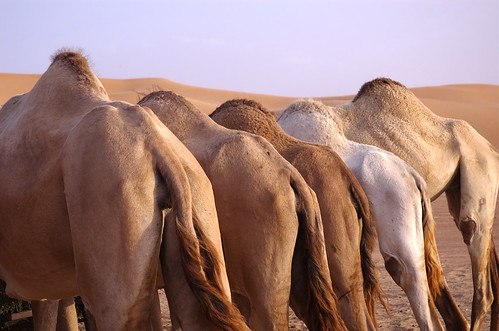 This bugger was arrogant, he spat at me, then smiled at me, check out this cheesy grin. 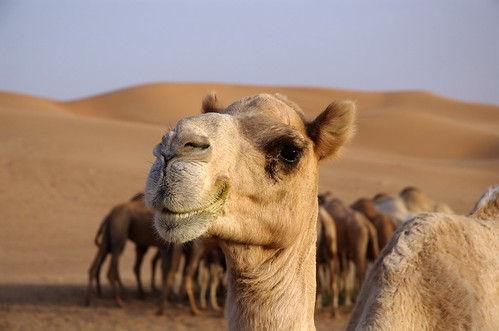 He loves to pose indeed. 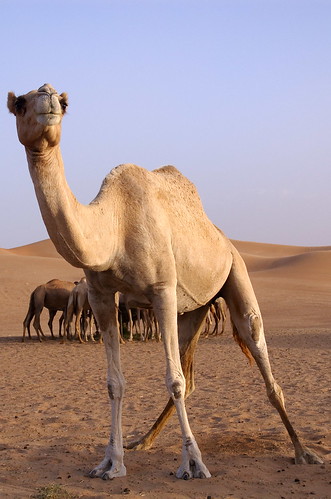 Footsteps in the sand, making use of the textures available.. 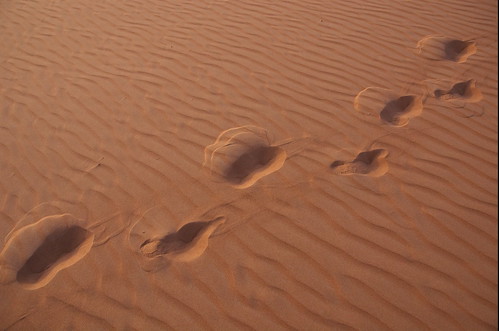 The sun going down over the dunes, this is my wallpaper now 🙂 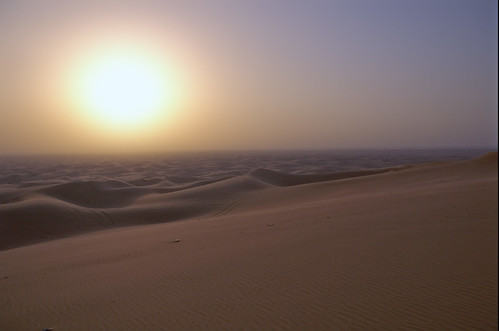 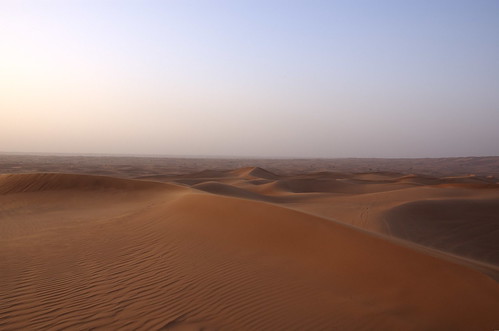 Chillin’ in the desert yo! 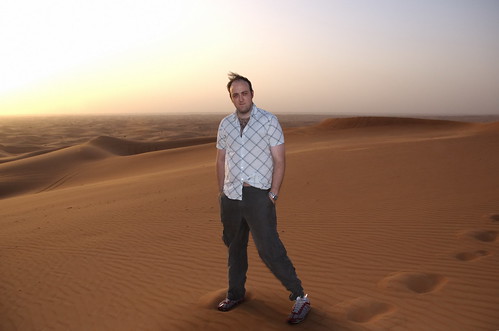 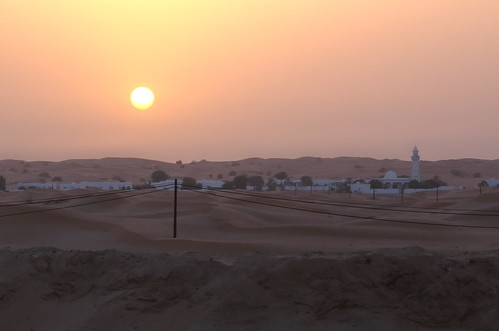 Watch out for part II with the Camel ride, Arabian BBQ and Belly Dancer!

I’ll catch up with the UK (Minehead and Mom’s party!) posts after I sort out everything else.

25 Responses to Dubai Desert Safari – A must do!