Well I’ve been using Firefox 1.5 for quite some time now, so I thought I’d write a little bit about it, and let you know if it’s worth upgrading from 1.0.7.

The first thing I noticed was greater memory usage, this may have been due to some of the extensions, but from what I’d read a lot of it was to do with the way Firefox cached images, and didn’t release the memory after the tab was closed.

After a day or so of use…my memory useage often looked something like this:

This is indeed quite insane.

That’s around 2GB of memory, including what it’s used from the page file, obviously something is wrong there.

I did see it improve slightly with an update to the Adblock extension, (d3 nightly 40 had a memory leak).

I’ve just updated to 1.5.0.1 today, so I’ll have to see if that makes it any better as it states in the release notes that it fixes some memory leaks.

I didn’t have any problems upgrading from 1.0.7 extension wise, it told me which extensions weren’t compatible and helped me check for updates, everything I really wanted was available so that was great. I don’t use all that many extensions now, namely:

One of the first things I noticed about 1.5 was it was considerably faster at opening new tabs, loading new pages and rendering HTML. It was quite an improvement over 1.0.7 (and it should be, with the amount of memory it uses!).

Something that really annoyed me about 1.0.7 was fixed aswell, the fact that when you had a pop-up window (like the comments on a blogger blog) and you opened a new link, it opened in a tab you couldn’t click on..you could only access it by using CTRL+TAB. In 1.5 a tab is actually shown, even in a pop-up which is good! 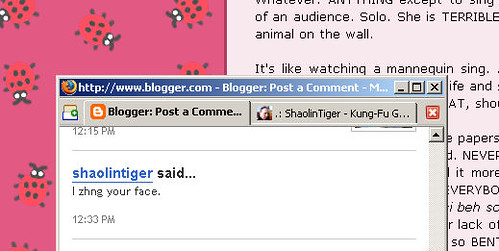 I’ve also noticed 1.5 does seem to be more stable with less random crashes and disappearing acts.

The update system is a lot more robust on 1.5 aswell, especially for the browser itself, for the 1.0.x series, you had to download the whole 5.8MB installer everytime you wanted to update a minor version..

Now the upgrade is slipstreamed and Firefox automatically downloads a small differential patch that installs itself without having to download the whole installer. It works just fine, I’m writing this via Firefox 1.5.0.1 installed via the new upgrade mechanism.

Other than that there’s not a hugely noticeable difference between 1.5 and 1.0.7, I held of upgrading to 1.5 for quite some time to make sure it was ok before I did.

9 Responses to My Experience with Firefox 1.5 & Memory Leak Problems