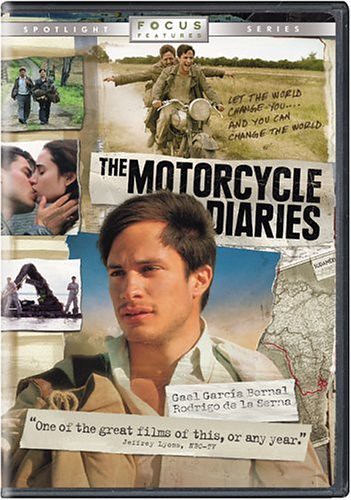 In 1952, two young Argentines, Ernesto Guevara and Alberto Granado, set out on a road trip to discover the real Latin America. Ernesto is a 23-year-old medical student specializing in leprology, and Alberto, 29, is a biochemist. The tale follows their journey as they unveil the rich and complex human and social topography of the Latin American continent.

I’ve been meaning to watch this movie for quite some time, numerous people have mentioned it to me (I have quite a few friends into motorbikes, so they came across it first).

Other than that it’s also reputed to be a very good film.

It’s the tale of Che Guevara (Dr. Ernesto Rafael Guevara de la Serna) in his early days, before he was a revolutionary and before he became the legend he is today, he of course famous for being the Argentinian-born Marxist revolutionary and Cuban guerrilla leader involved with Fidel Castro.

It’s a beautifully subtle film documenting the personal development of Che and you could say, the things that changed him and led him to become someone that wanted to make some changes.

The film is based on diaries and letters to home written by Ernesto “Che” Guevara during a motorcycle and foot tour of a significant portion of South America during the early 1950, he started from their native Buenos Aires down to Patagonia, up through Chile, Peru, Colombia to Venezuela.

The solidarity of the journey is very touching and the scenery is breathtaking like a National Geographic documentary.

It’s a movie well worth watching and I recommend grabbing a copy if you can find it!

I’ve always wanted to visit that region anyway, the andes, the amazon, but this film exemplifies the beauty.

The issues of corruption in Malaysia.
‘Squatgate’ vs Abu Ghraib