War of the Worlds – Half a classic? 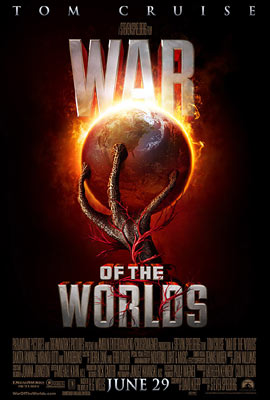 Ray Ferrier is a working class man living in New Jersey. He’s estranged from his family, his life isn’t in order, and he’s too caught up with himself. But the unthinkable and, ultimately, the unexpected happens to him in an extraordinary sense. His small town life is shaken violently by the arrival of destructive intruders: Aliens which have come en masse to destroy Earth. As they plow through the country in a wave of mass destruction and violence, Ray must come to the defense of his children. As the world must fend for itself by a new and very advanced enemy not of this world, it’s inhabitants must save humanity from a far greater force that threatens to destroy it.

This was *almost* a great movie, I mean really really great, a classic, for the first 2 acts, the first half it was gripping, emotional, scary, involving and just great to watch (Especially on a THX screen!)..

There was another War of the Worlds made in 1953[/url], which although not totally faithful to the book was better than this one, especially for it’s time it was definately one of the best Sci-Fi movies made….BTW the grandparents at the end, they are the original actor and actress from the 1953 movie.

Speilberg has the power to make any movie he want and he comes out with this pap.

The movie seems to almost grind to a halt and change tone half way through…The special effects stopped pretty much, and 1/4 of the movie was wasted in a freaking basement, where I almost fell asleep, then after that it was just the most horribly sickeningly syphillitic cheese dick ending.

It was almost like they ran out of budget..

Tom Cruise played the first half pretty well, as it suits him and his 2 expressions (Shock, and Gormless Shock)..he is well experienced in playing expressionless assholes..And he just spent all his time running..which he seems to do pretty well. 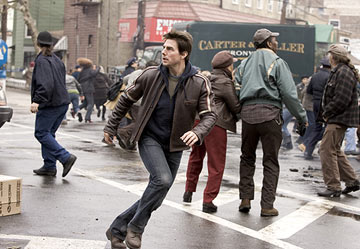 The special effects were mind blowing, they were so realistic, especially with the THX system shaking my bones, I actually felt scared during the first half, which is pretty rare, that’s how atmoshpheric it was and how well directed it was…truly chilling..

Then they got the basement scene, from then onwards the movie went downhill fast..Even the cellar scene with the alien probing lacked suspense and has totally been done better before. Tom Cruise became the hero type, which he isn’t supposed to be in this movie..

There was a lacking plot, a huge dollop of prime cheese sauce at the end and a lot of stupid shit that didn’t even make sense..

Why after the EMP kinda lightning thing, did that guys camcorder still work?

Why after the huge devastation and multiple plane crashes there was still a neat lane for Cruise to drive out of in his undamaged MPV?

Why were the force fields off? Because the aliens were ill, they just like switched off?

Why can the super high-tech robot probe thing not detect people whispering a few feet away but seems to notice everything else?

The burning train did rock my socks though..

There is a lot of character development at the beginning…but then it just stops too, you end up not really caring for the characters..

Plus the ending just dribbled away like a bout of mild diarrhea going down the drain, the aliens just caught a cold and died, how nice..

Why did he still have to be alive? That just was just TOO CHEESY, and the grandparents, in the untouched street with make-up and coiffured hair? WTF?!

It was kind of a roller-coaster for me though, I was expecting it to be bad, then it started out, I was like OMG THIS IS AWESOME, then it turned to shit after the cellar scene. *yawn*

It’s pretty hard, I mean nigh-on impossible to stick faithfully to the legendary book by Orson Wells, but still it could have been a GREAT movie.

Overall hard to rate….it’s worth watching, but once they get to the cellar feel free to leave as it’s just crap.

Metrosexual or Homosexual? Where is the line?
Waking up on the right side of bed – I’m a night person..

18 Responses to War of the Worlds – Half a classic?