After buying some DVD’s in Sungei Wang, I thought it was about time I watched one of them, most were old favourites I’ve watched before and wish to watch again (Scarface, Sleepers etc) but a couple were new ones, so I settled down with National Treasure[/url].

I’ve heard from the handful of people that have seen this that it’s a pretty decent movie, and I generally like Nicholas Cage[/url] movies (Face off[/url] being one of my favourite action flicks) so it should be good. Apparently I look like him, must be the hairline 😛 Few times people have mentioned, most memorably was probably the hot SPG in Thai-club.. 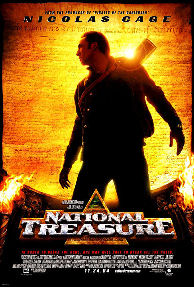 Since childhood, Benjamin Franklin Gates has known that he is decended from a long line of people whose job is to guard a treasure hidden by the Founding Fathers, who hid clues to its whereabouts in the country’s currency and on the back of the Declaration of Independence. Now, he has learned of a plot to steal the Declaration, and has only one option: steal it himself. Even if he pulls off this monumental task, keeping the treasure safe is still going to be incredibly hard, especially since the FBI has also gotten wind of the scheme.

The film is a solid, fun leave your brain at the door action romp, doesn’t require much thinking, doesn’t make much sense, isn’t very believable (but it’s just about believable enough) and has very typical ‘bad guys’ and ‘good guys’ of course the cliche chick who starts out disliking the anti-hero ends up falling for him.

It’s stretched a bit and I felt it dragged a bit in places, but overall it was pretty good, gripping and some good one-liners, if they cut it down a little if would have been just right.

There isn’t a huge amount of actions sequences it’s a little more subtle, dialogue and plot based. It’s definately a family movie too with no hardcore sex or extreme violence. It’s somewhere between Ocean’s 11[/url] and Indiana Jones[/url], and DEFINATELY a lot better than Tomb Raider[/url], a good mix.

It’s worth a watch, it’s certainly not awe-inspiring, totally original, complex, thought-provoking or any of those ‘classy‘ things, but it’s fun and entertaining, how movies should be.