Malaysian Bureaucracy and the Summons Fiasco

Well the clampdown has finally begun as reported by The Star today..

KUALA LUMPUR: Ong Tze Chiang was rudely awakened at about 1pm by his father who told him that a group of people wanted to meet him outside his house at the Sri Johor flats in Cheras here. 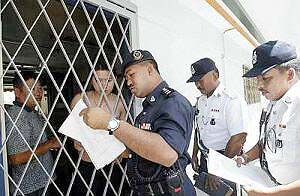 Clad only in his shorts, the 26-year-old man came out to greet his “visitors,” but was shocked to be met by blinding flashes from the cameras of photographers, a horde of journalists and police officers.

Not knowing what they were there for, Ong was momentarily stunned until police informed him of his outstanding summons for a traffic offence.

(Mr Ong, we have a warrant of arrest under your name for failing to settle a summons in relation to a car accident which was issued on Oct 2, 2004. You are required to come to the police station with a bailor.)

Ong was the first person to be arrested under Ops Warta IV.

If you’ve been following my posts, you’ll have noticed I had some summons, and I had to work my ass off to get them paid…they make it so fucking difficult.

Now this whole shennanigan hasn’t exactly been well publicised, I’ve seen one tiny 1/4 column text only piece in the paper mentioning the fact that summons need to be paid before January 2nd or you might get hauled off to prison..

I wonder why they would do that? Oh yeah…if they publicised it, people might actually pay, there would be less opportunity for bribes and getting people into court for ridiculous crimes such as parking in the wrong places, or in my case exceeding the speed limit by not more than 30km/h…

The paper also published the fact that all counters would be open ’til 6pm so people could pay easier, I mean wtf? Most people finish work at 6pm, some of us work in a freakin jungle (Cyberjaya) and are miles away from the nearest Balai (Police Station)..How exactly are we supposed to pay?

Even though that was complete bullshit anyway as I went to the PJ police headquarters and was duley informed the counter had closed at 3pm….waste of time or what.

There are counters in shopping malls too, I’ve visited the one in 1 Utama about 5 times, all of which the computer was ‘offline’. For anyone who’s interested, it’s in the old wing, Eneos car centre..I mean for the love of monkeys, I am trying to give them money, it’s like they don’t want people to pay, they want us to be arrested and beaten on the soles of the feet with bamboo canes.

So, what’s the deal here in Malaysia..

1. You do something naughty, like going a bit fast
2. Some(one|thing) sees the naughty act
3. You get a summons
4. You get 0 notification, yes I mean NONE
5. Unless you check yourself, online you don’t even know you’ve gotten any summons
6. You don’t check online, you get some fat officer knocking on your door wanting to arrest you
7. Rinse and Repeat

1. You do something naughty, like going a bit fast
2. Some(one|thing) sees the naughty act
3. You get a summons
4. You get 0 notification, yes I mean NONE
5. You check online and find you have summons against your car
6. You spend 2 weeks trying to pay the damn summons and waste like 2 days of annual leave
7. Eventually persuade someone else to pay the summons because you have a job you wish to keep
8. Have the summons paid with the realisation you will have to go through the whole shitty affair again
9. Rinse and Repeat

1. Speed
2. Get Caught
3. Get a notice through the post 2 days later with the location and offence
4. Have 30 days to pay with discount, 90 days to pay before court appearance
5. Pay by cheque through the post, by credit card over the phone or cash at the nearest police station
6. Don’t speed again because you’ll get 3 points on your licence (12 is a 1 year ban)

Don’t get me wrong, I love this country I really do, but there are still a lot of things that have to change…the bureaucratic system, customer service (or lack of it), racial bias in the education system and in general (both positive and negative racism), sexual crime, business attitudes and various others things such as the attitudes of civil servants and other workers Tidak Apa, which means never mind or it doesn’t matter (stems from other issues previously mentioned).

Will blog about all these topics as they unravel in my mind..

The lesson to be learnt is, don’t get summons, check regularly online just in case you did, keep your ears open for clampdowns (I heard about this one on IRC) and finally don’t expect to be able to pay your summons easily..

For those who want to check their summons online you can do so via Rilek/Catcha HERE.

61 Responses to Malaysian Bureaucracy and the Summons Fiasco