Stop 114A – A Major Threat To Freedom Of Expression Online 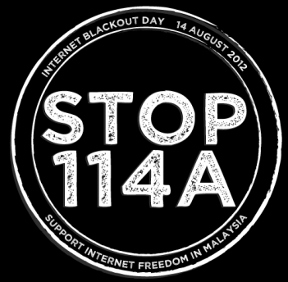 Section 114A is the second of two amendments made to Malaysia’s Evidence Act 1950.

Law Minister Nazri Aziz tabled the second amendment, formally known as Evidence (Amendment) (No2) Act 2012, in Dewan Rakyat on 18 April. James Dawos Mamit supported the motion, and Section 114A was passed after the second and third reading. On 9 May, Dewan Negara passed the amendment.

The amendment was gazetted on 31 July 2012. This means the law is now operational.

What is the purpose of Section 114A?

Section 114A deals with allegedly illicit or harmful content on the Internet. In short, the amendment enables law enforcement officials to swiftly hold someone accountable for publishing seditious, defamatory, or libelous content online.

How does Section 114A affect you?

(1) those who own, administrate, or edit websites open to public contributors, such as online forums or blogs;

(2) those who provide webhosting services or Internet access; and

(3) those own the computer or mobile device used to publish content online.

In other words, if allegedly defamatory content is traced back to your username, electronic device, and/or WiFi network, Section 114A presumes you are guilty of publishing illicit content on the Internet.

Under Section 114A, you are still considered guilty until proven innocent.

What is wrong with Section 114A?

Section 114A is problematic for a number of reasons:

i) It disproportionately burdens average Internet users who are wrongfully accused of publishing seditious or defamatory content.

ii) It makes Internet intermediaries–parties that provide online community forums, blogging and hosting services–liable for content that is published through their services.

iii) It allows hackers and cyber criminals to be free by making the person whose account/computer is hacked liable for any content/data which might have changed.

iv) It is a bad law passed in haste and does not take into account public interest and participation.

How will Section 114A affect the freedom of expression?

Section 114A threatens the right to freedom of expression. Internet users may resort to self-censorship to avoid false accusations made under Section 114A. Bloggers, for example, may excessively censor comments made by their readers. As a result, Section 114A inadvertently stifles public discussion about pertinent political or social issues and protects public authorities, such as the State, from public scrutiny.

You can find many more 114a resources here: